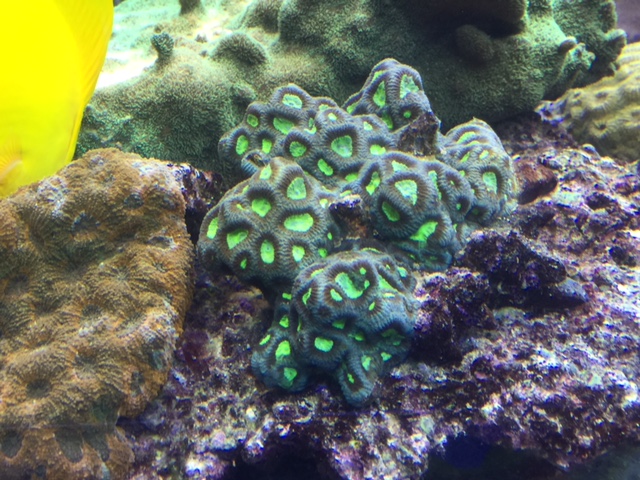 Here is a captive grown colony of Cortez Favia. 7 Polyps to full colony in 1 year.

One of my life goals is to become a key player in the restoration of coral reefs. Until that time comes, I get to play pretend with one of the world’s largest thriving reef tanks, Joe Yaiullo’s 20,000 gallon behemoth. Last year, Joe noticed how several of our (ReefGen’s) Cortez Favia frags had fused into large, healthy colonies, and asked me to make him one for his tank. I happily agreed. As an aside, this technique is also used by Jamie Craigs from the Horniman Museum and Aquarium to produce spawning-size Acropora colonies in a short amount of time.

Joe’s front colony, pictured above, was originally seven individual polyps grown on ReefGen frag plugs. After sufficient growth was achieved, I placed all the frags on a custom mount to create the substrate for the corals to grow onto and into a full size colony. I made the colony in a fractal shape to give a more dynamic and natural look in a shorter amount of time.

Below is a picture of another Cortez Favia colony, this one tucked in among several other coral, mostly SPS. This Favia is hardy and can handle a wide range of parameters; the colony closer to the front viewing panel receives less flow and light and tends to encrust more while the colony in higher flow and light is becoming more mound-shaped, and the competition it faces around the colony edges is encouraging it to grow steadily upwards. 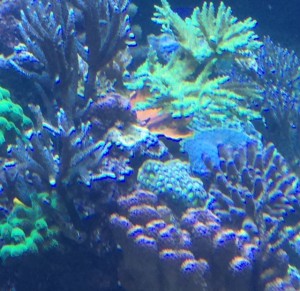 I’m so pleased with the growth and health of these colonies, and will continue to make more, both for myself and, hopefully, We are making more of the colonies for ourselves and hope to offer them more widely in the future.