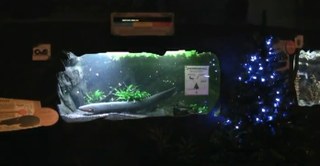 Rockin’ around the Christmas tree!


Electric eels, as you know, produce an electrical current when they move and when they attack prey. They have been know to produce as much as 500 volts and 1 ampere of current (500 watts) in certain situations.

Living Planet Aquarium staff exploited this trait to control a series of Christmas Tree lights in their “Journey To South America” gallery. They placed stainless steel electrodes into the eel tank and used the electricity generated by the movement of the electric eel to power a light sequencer. The sequencer, in turn, rotated through each string of lights when the eel moved.

Terry Smith, Project Manager at Cache Valley Electric commented that “the sequencer takes the voltage the eel produces and operates circuitry that flashes the lights, fast or slow, based on the level of voltage he puts out.”

Talk about an electrifying holiday display!