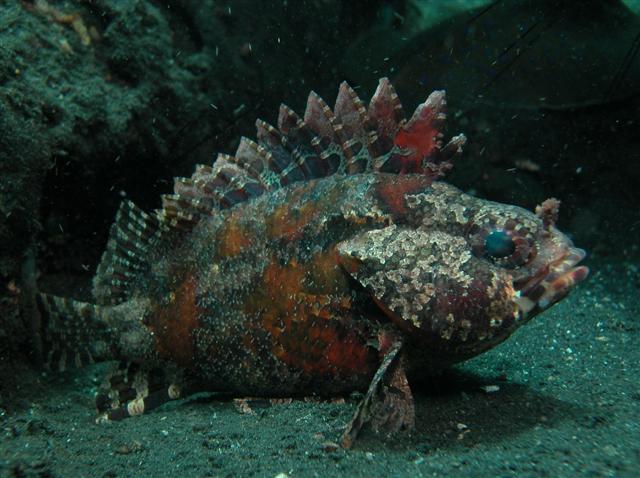 Centrogenys vaigiensis has been known to science for nearly two-hundred years, but, in all that time, we’ve yet to crack the mystery of what this fish is supposed to be. At first glance, it’s hard to understand the enigma surrounding such a seemingly mundane little species. It looks tantalizing familiar, doesn’t it, as if it’s shape has been copied from any number of other reef fishes. But the devil is very much in the details here.

While the answers we seek might be hard to come by, the fish itself isn’t. You’ll find Centrogenys in a variety of shallow habitats, including silty bays, mangroves forests, intertidal sand flats, seagrass meadows, brackish estuaries, and areas of reef rubble (though it seems to be largely absent from coral-rich habitats). The documented distribution stretches from the Andaman Sea and the Ryukyu Islands of Japan, south to Australia and New Guinea, and there is even a specimen recently recorded from Reunion in the Western Indian Ocean, suggesting a wider range in the Indian Ocean than is currently reported.

Mature specimens are capable of reaching up to ten inches in length. So what we have here is a relatively large and prominent species that is easily collected and geographically widespread, which of course makes the ongoing struggle to classify it all the more remarkable. We probably should know what this fish is, and, yet, we don’t. Morphologists have been investigating it for the better part of two centuries, all to no avail, while genetic studies have repeatedly painted an inconclusive picture.

The first researchers to study this incomprehensible fish were the famed French naturalists Quoy & Gaimard, who in 1824 published the name Scorpaena vaigiensis for it (naming it after the type locality of Waigeo, Indonesia). And it’s not hard to see why they chose to classify it within this large scorpionfish genus, as it certainly shares a similar gestalt. This species is not, however, venomous*, and there are important morphological differences in the adults and larvae, especially with regards to the reduced spination of the head. The incredible resemblance is instead thought to be an example of Batesian mimicry, with the model possibly being the Golden Scorpionfish (Parascorpaena aurita) or the Northern Scorpionfish (Parascorpaena picta).

*Anthony Gill informs me that the spines of this fish may indeed be venomous, though this has yet to be confirmed with anatomical study.

Quoy & Gaimard would by no means be the last researchers fooled by this fish. For the next century, it was repeatedly redescribed and reclassified as a scorpionfish (e.g. Myriodon waigiensis, Sebastes stolickzae, Gennadius stoliczae, Rhabdosebastes stoliczae). Writing in 1935, the Australian ichthyologist Gilbert Whitley opined wryly that “this species may perhaps be termed the pons asinorum of ichthyology.”

It was the anatomist Cuvier who first recognized this fish’s misclassification, relocating it to the bass family Serranidae within the genus Centropristis (at the time, a highly diverse and artificial grouping). By 1842, the Australian naturalist John Richardson observed that this fish was quite unlike these other basses and suggested its present nomenclature, Centrogenys. He noted that the species had “very short, densely crowded teeth, with the dental surfaces curved and fitting into each other, and evidently adapted for rubbing down or bruising soft substances rather than for retaining a living prey.” This is quite different from the sharp dentition of a grouper, but his notion that Centrogenys fed upon non-living prey was ultimately unfounded, as we now know the diet to consist heavily of penaeid prawns.

For most of the 20th century, Centrogenys was subsumed within the Serranidae as a distinct subfamily, but this too would fall out of fashion upon further scrutiny. The False Scorpionfish presents a perplexing melange of traits that matches poorly with anything else in the ocean. Aside from the peculiar dentition, there is a pronounced nasal cirrhus (similar to what we see in many scorpaeniforms) and a uniquely shaped anal fin, with the second spine greatly exaggerated. But strangest of all are its pharyngeal jaws, whose phylogenetic importance was apparently overlooked by these early authors. Specifically, the 5th ceratobranchials are fused together and articulated to the skull in such a way as to allow for a robust chewing motion.

Pharyngeal jaws exist in a limited number of fish groups, but these are thought to represent a major morphological innovation which allowed for innovative new feeding strategies to evolve. Not coincidentally, some of the most diverse and ecologically important fish families are those which possess this apparatus—cichlids and damselfishes, wrasses and parrotfishes, the temperate-water surfperches. These at one time formed a group known as the Labroidei, but molecular study has since revealed them to be only distant relations. Thus, pharyngeal jaws have convergently evolved on a number of occasions.

This leaves us with the mystery of Centrogenys and the origins of its set of pharyngeal choppers. Did it acquire this trait independently or does it stem from a shared common ancestor with one of these families? To date, there is no firm consensus on where this species might fit in the larger family tree of fishes. Wainwright et al. 2012 examined a large number of genes and species and came to the (poorly supported) conclusion that it belongs as the sister group of the sandperches and stargazers. If we jump ahead to Betancur-R et al. 2017, we find Centrogenys as the sister group to wrasses, but, again, with poor support. This led the authors to classify it within its own family as incertae sedis (“of uncertain placement”), and about all we can say definitively is that this is a perch-like fish of some sort.

In this day and age, it is becoming increasingly difficult for anything to remain in such a confused state of phylogenetic limbo. With each passing year, researchers manage to pull back the evolutionary curtain a bit more, slowly revealing the complex tapestry of life that surrounds us. But we’ve yet to make these same strides with Centrogenys. The False Scorpionfish is a singularly intransigent species, an ichthyological orphan that has for two centuries now eluded the grasp of taxonomists. Will we ever decipher this piscine riddle?