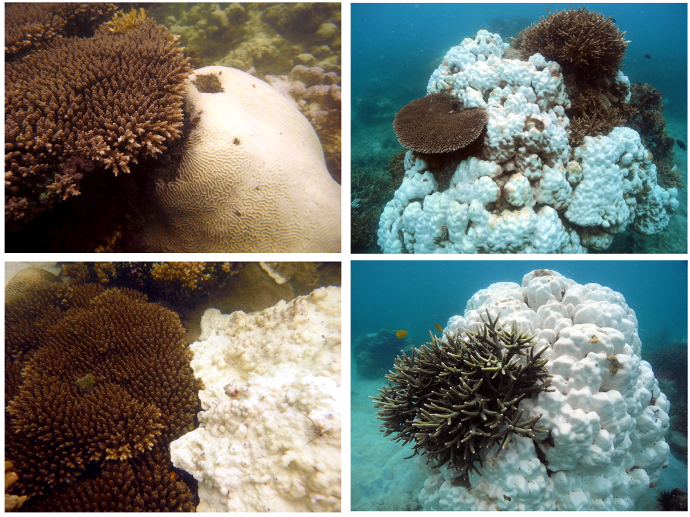 A healthy Acropora coral (front) appears to have better resistance to warmer waters than the bleached Porites behind it. Photo by James Guest.


The data is not definitive, but it is hopeful at least.  In the PLoS ONE paper “Contrasting Patterns of Coral Bleaching Susceptibility in 2010 Suggest an Adaptive Response to Thermal Stress” by James R. Guest and others, they discuss if and how this might be possible.

Acropora and Pocillopora are typically key markers for coral bleaching as they are usually the first to be affected. Researcher James Guest wrote that “remarkably, Acropora and Pocillopora, taxa that are typically highly susceptible, although among the most susceptible in Pulau Weh (Sumatra, Indonesia) where respectively, 94% and 87% of colonies died, were among the least susceptible in Singapore, where only 5% and 12% of colonies died.”

“A growing body of evidence indicates that the capacity for adaptation and acclimatisation in corals has been underestimated” states Guest. “Selective mortality among individuals within populations suggests there is sufficient genetic variability upon which natural selection can act.”

That being said, “an adaptive response in certain [corals] at a few locations does not mean that the global threat to reefs from climate change has lessened. There are likely to be limits to thermal adaptation and acclimatisation, and these may incur costs in life history traits such as growth, fecundity and competitive ability.” remarks Guest. “The results of the present study do indicate however that the effects of bleaching will not be as uniform as anticipated and fast-growing branching taxa such as Acropora and Pocillopora are likely to persist in some locations despite increases in the frequency of thermal stress events.”