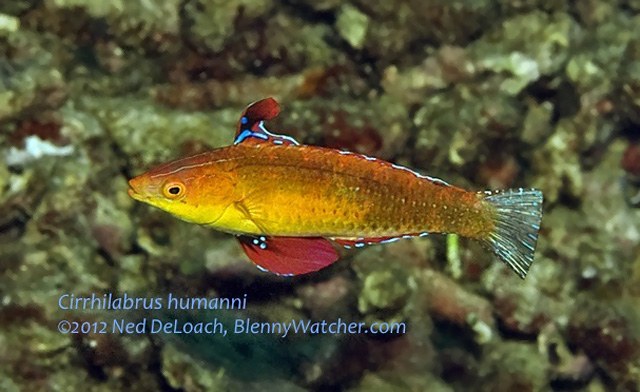 I first saw the fish on April 20, 2010 in about 40 feet off Alor, Indonesia. Ned was not with me so I shot video. We were able to return 2 weeks later and he took photos. We sent them to [Dr. Gerald] Allen and Dr. Hiroyuki Tanaka who both felt it was undescribed.  [Allen] and Dr. Mark Erdmann were able to collect 2 specimens last year during one of their CI [Conservation International] survey trips.

Ned and Anna were given the honor of naming the new fish.  They chose to name the fish after Paul Humann, esteemed author and underwater photographer.  The Alor Fairy Wrasse will make its public print debut in Allen and Erdmann’s upcoming book, Reef Fishes of the East Indies, published by the University of Hawaii Press.

Watch Anna DeLoach’s video of C.humanni “flashing.”  Its brilliant courtship display makes it all the more surprising this shallow water species alluded discovery for so long.

Read more about the the Alor Fairy Wrasse’s discovery at www.blennywatcher.com.  It’s amazing how much we still do not know about the animals whom share our world.  We tip our hats to the scientists and ocean explorers for expanding our knowledge and appreciation of our living planet.