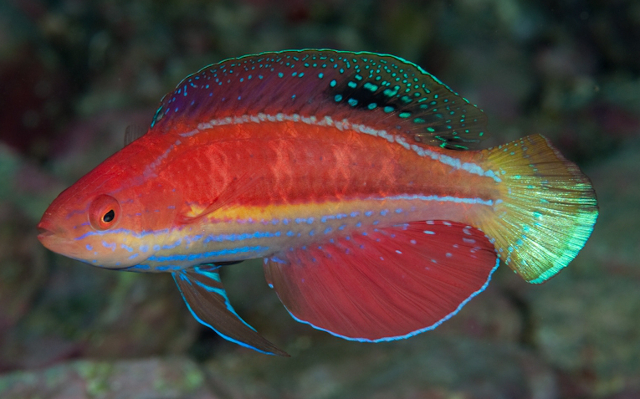 It isn’t always obvious why one species of fish is popular with aquarists and another isn’t. A variety of factors need to be considered—first and foremost is price and aesthetics, but other variables also weigh in, such as how rare a fish is, how aggressive a fish is, how hearty a fish is. There’s a sort of ichthyo-capitalistic game theory which takes place between aquarium retailers and aquarium consumers which ultimately determines how much value a fish has in the marketplace. This can be particularly interesting to observe for a species new to the industry, such as Cirrhilabrus katoi.

In the pantheon of Cirrhilabrus, Kato’s Fairy Wrasse is a virtual unknown. It’s biogeographic range is almost entirely restricted to the waters of Japan, from the Ryukyu Arc in the west to the Izu Islands in the east, generally being restricted to fairly moderate depths. In the past, it would occasionally trickle into the Japanese aquarium market, but, in essence, this was one of the great “book fishes” of the genus—a rare and unobtainable beauty, on par with things like C. claire from Polynesia or C. blatteus from the Red Sea. 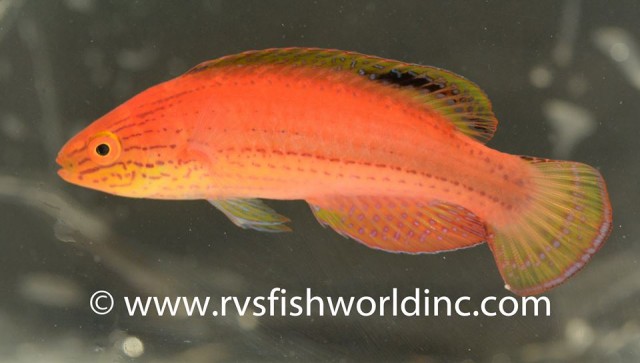 Young specimens like this one give little indication for the sumptuous beauty of the terminal male. Credit: RVS Fishworld

And then, lo and behold, earlier this year the fine people at RVS Fishworld began collecting this species at Cagayan, the northernmost tip of the Philippines and a region which sees considerable overlap with the neighboring Japanese ecoregion. Suddenly, a seemingly desirable fish became available to American and European aquarists, albeit in relatively small numbers. But this is still not a fairy wrasse you are likely to see at your local fish store, unless your local fish store has a penchant for acquiring rare species.

I happened to be visiting my alma mater, Old Town Aquarium, the other night, when I was directed to a display housing a recently arrived pair of this fish. Still new to their surroundings, they were swimming nervously, fins held closely to the body, the female cowering in the corner. It’s difficult to appreciate the true beauty of any fish in such instances, but especially something like a fairy wrasse, which must feel confident and at ease before its full resplendence is exhibited. While it was exciting seeing such a rare species in the flesh, a fish which at the moment likely exists in just a small handful of aquaria in this country, I couldn’t help but feel a bit underwhelmed by it.

Chromatically speaking, C. katoi looks something like a cross between Pyle’s Fairy Wrasse (C. pylei) and a Temminck’s Fairy Wrasse (C. temminckii). All of these have relatively long pelvic fins and a shimmery caudal fin margin, which hints at a shared ancestry that I’ve discussed elsewhere in a review of this genus. At first glance, katoi is not an unattractive fish, and, when photographed at the height of its sexual display, this species is one of the more flamboyant members of its genus. But, having now observed this fish face to face—a skittish and secretive creature with disappointingly muted reds and oranges and with a displeasingly sooty dorsal fin—it would take considerable imagination to see the potential beauty of a male in sexual display, to imagine the full splendour of its enlarged fins, richly colored in crimson and intricately filigreed with reflective blue spots. 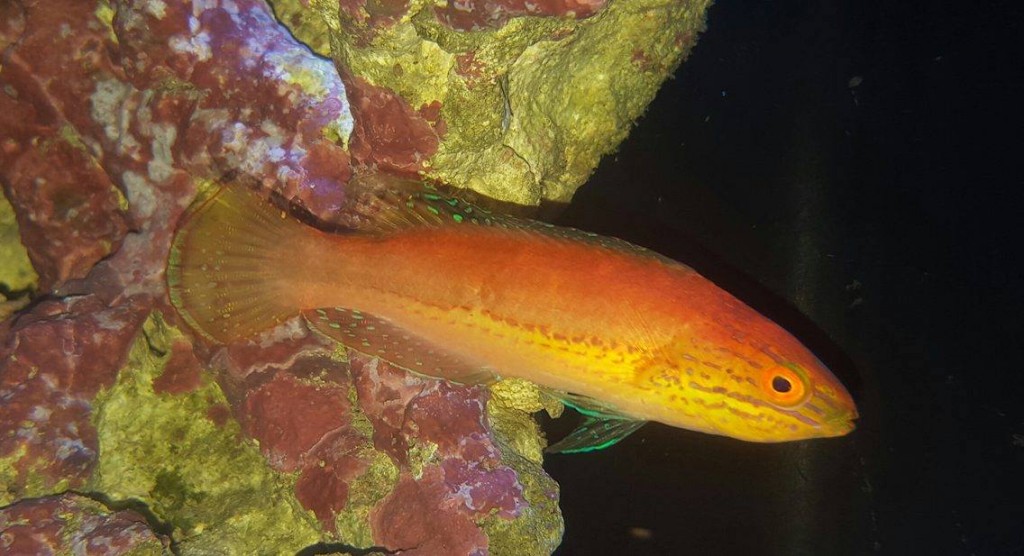 This young male C. katoi is somewhat underwhelming… still has some growing to do. Credit: Kevin Curty/Old Town Aquarium

For such a rare fishy, it’s surprising just how affordable a specimen or two can be. These are in the same ballpark as the ever-popular Flame Fairy Wrasse C. jordani, and distinctly less than some of the true showstoppers of the genus, like C. rhomboidalis or C. lineatus. And, yet, there seems to be shockingly little demand for C. katoi. Last I heard, the pair I saw is still swimming happily in Chicago. Checking online, LiveAquaria has three available, on sale, and they seem to have been there for quite some time.

Which brings me back to my original point: what determines a fish’s desirability and price in this hobby? Why does a truly rare species like C. katoi go overlooked, when something like C. claire can sell instantly for absurd amounts of money in the Japanese market. Both are more or less equally rare and equally attractive. Both, up until recently, would have been considered exclusively “book fish”. Yet one is valued at thousands of dollars while the other has to be marked down to sell. Do American aquarists simply care less for rarity when making their piscine purchases, or is there some intrinsic quality lacking in C. katoi—a certain je ne sais quoi this fish is devoid of?