In 2007, I purchased a pair of Cirrhliabrus rhomboidalis from Brian Greene of Twilight Aquatics for my 176 gallon reef aquarium. I had kept numerous Fairy Wrasse species before this pair, but I was not prepared for what my new male Rhomboid was to show me.

On a night like any other, I was walking past my aquarium on my way to my kitchen to grab a snack, when a bright flash of light caught my peripheral attention from the direction of my reef.  I turned to witness the most electric sight … my male Rhomboid was in full blown courtship ritual!  And by electric, I mean electric; Every chromatophore was firing! The wrasse glowed an insanely bright neon yellow and electric blue, darting rapidly back and forth and up and down.  The next night, I grabbed my camera hoping to catch a repeat performance, and my wrasse did not disappoint.  It’s impossible to put into words, and photos only do the display partial justice.

This is my male C.rhomboidalis in his normal state … already quite the show-stopper.

Here he is, at the onset of the nuptial display.  Note the collapsed fins and intensified pigmentation.

And the pigmentation only became more intense as the wrasse assumed an even more distinct arrow shape.

As amazing as the wrasse looks here, the photo does not capture the luminescence of the display.

With this photo, you can understand what I mean by electric.  The Rhomboid is simply bioluminescent … especially its dorsal fin.

My Cirrhilabrus rhomboidalis performed this ritual on a nightly basis for several months.  It stopped only when the other male wrasse cohabiting the tank became the dominant specimen of my aquarium.  Which wrasse supplanted my Rhomboid, you ask?  The even rarer and more incredible Cirrhilabrus earlei (also from Brian Greene)! 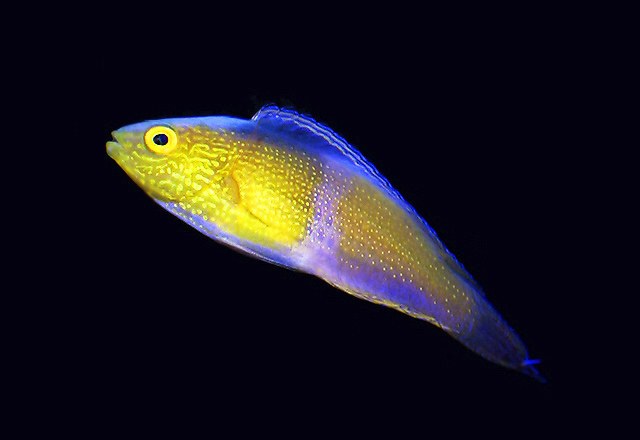 For anyone wondering why C.rhomboidalis is named the Golden Fairy Wrasse …