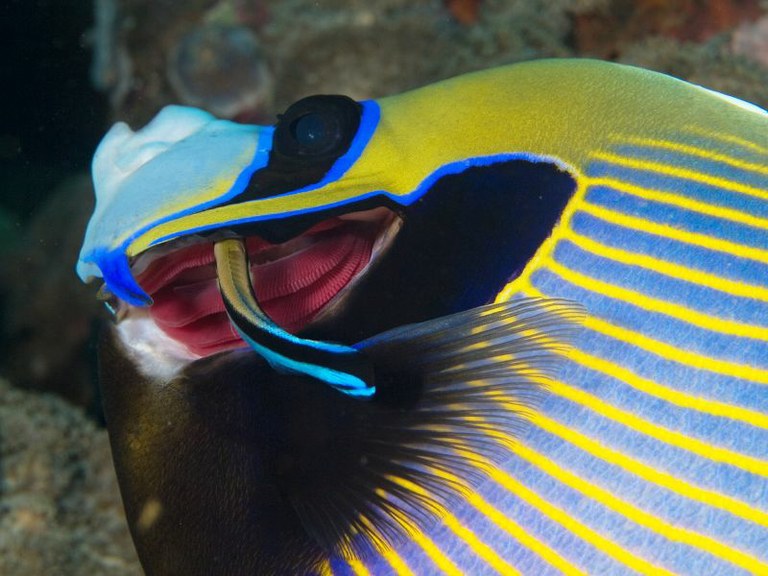 
Let’s begin with a little background about cleaner wrasses (Labroides dimidiatus).  Cleaner wrasses are protogynous hermaphrodites, meaning they all start their lives as females.  The dominant female will change into a male and ultimately rule a harem.

Marine aquarists are familiar with cleaner wrasses’ penchant for cleaning other fish by eating the ectoparasites off of their client.  But every so often, a wrasse will get greedy and take a bite out of the protective mucus membrane of their client, which results in the unhappy client making a quick retreat and leaving the cleaner wrasses without a food source.  Males are known to punish females after these events (in essence, blaming the females for his lost meal).  But does he punish all the females equally?

To find out, scientists exposed multiple pairs of cleaner wrasses to two types of foods: a preferred “prawn” food and a less-preferred “flake” food.  The scientists then removed the foods to see how the male wrasses punished the female he was paired up with.  They discovered:

In the wild, cleaner wrasses will form harems of one male with up to two dozen females.  The male will spend most of its time with the largest female … not because he loves her most, but rather because he wants to monitor and control this female in order to prevent her from becoming a him.  And this recent study shows that the largest female also gets the worst of his punishments, even if she’s not guilty of anything.

The practical lesson?  Aquarists interested in maintaining harems of fish – whether it be Fairy Wrasses or Anthias – may consider smaller females to reduce male-to-female harassment.

I apologize for the title!  I’ll be sleeping on the couch tonight.

REFERENCE: The Proceedings of the Royal Society, Biological Sciences.