Cleaner wrasses and the science of voyeurism 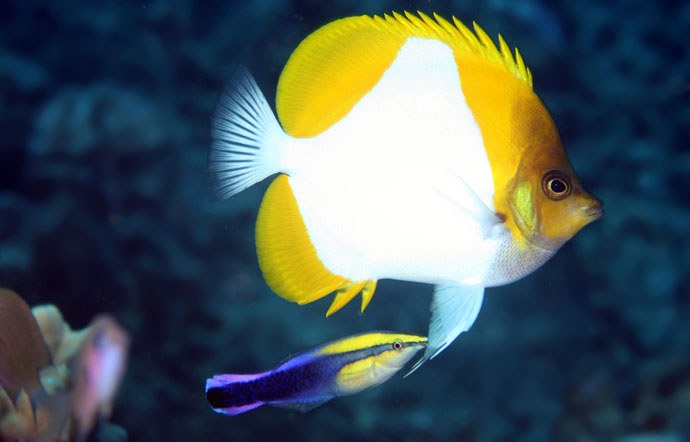 Cleaner wrasses are on their best behavior when they have an audience. Photo by Klaus Stiefel


Cleaner wrasses service fish by picking off ectoparasites from their client’s skin.  Every once in a while, a cleaner wrasse will get overzealous with its cleaning service and take a nutritional bite out of their client’s mucus layer (a behavior called “cheating”).  To the client fish, this feels something like a sharp pin prick, so the client will often jolt/twitch if not swim away entirely.

A study published in Current Biology discovered that fish will observe other fish being serviced by a cleaner wrasse in order to decide if they will employ the wrasse’s service. Furthermore, the study concluded that cleaner wrasses understand their client’s decision-making process and thus are on their best behavior when they have an audience.

Scientists first removed the ectoparasites from five of ten Striped Bristletooth Tangs (Ctenochaetus striatus), then paired ten cleaner wrasses (Labroides dimidiatus) with the ten tangs, each pair housed in separate tanks.  The pairs with ectoparasite-free tangs were all placed in tanks on one side, while the pairs with untreated tangs were placed on the other side.  In a central tank between the two rows of pairs, the scientists placed Bridled Monocle Breams (Scolopsis bilineatus) behind one-way mirrors to serve as spectating bystanders.

In another series of experiments, the scientists measured the rate of jolts of client fish depending on whether or not the cleaner wrasses had bystanders in visual sight.  Untreated tangs were paired with cleaner wrasses, with half the pairs housed in tanks with Breams in plain sight.  Client fish exhibited fewer jolts when they had a onlooker, telling researchers that cleaner wrasses knew to be on their best behavior when they had potential clients watching on.  Cleaner wrasses understand the art of self-promotion!