Clownfish are the sea’s finalists for “Fathers of the Year”

From the University of Illinois at Urbana-Champaign:

Like the father in “Finding Nemo,” anemonefish dads will do almost anything to support their offspring. Their parenting instincts are so strong that if you give a bachelor anemonefish a scoop of anemonefish eggs from an unrelated nest, he will care for them – constantly nipping at them to remove debris and fanning them with oxygen-rich waters – as if they were his own. (Any other fish would eat them, researchers say.)

A new study of this species, Amphiprion ocellaris, reveals some of the potent hormonal signals that regulate this gallant paternal instinct. Researchers report that anemonefish rely on a signaling molecule that is almost identical to oxytocin – known as the love hormone in humans and also associated with mothering – to maintain their fatherly fidelity. When researchers blocked this hormone, known as isotocin, in the male fish, the dads stopped tending to their young.

This is not the first study to show that isotocin regulates paternal care in fish, but it is the first to focus on the anemonefish, which the researchers describe as a paragon of fatherly love.

“Because the fish are so committed to their role as fathers, we’re able in the lab to dissociate their parental behavior – the fanning and the nipping – from behaviors associated with courtship, territory defense and nest defense,” said University of Illinois graduate student Ross DeAngelis, who led the study with psychology professor Justin Rhodes. “This allows us to look at how the brain regulates male parental care in isolation from other behaviors that occur simultaneously.”

The researchers also analyzed how another hormone, arginine vasotocin, influences paternal care in anemonefish. Other studies suggest the hormone plays a role in regulating dominance, aggression and courtship. It also has a homolog in humans, known as arginine vasopressin.

“All these peptides – isotocin and oxytocin, arginine vasopressin and vasotocin – have very similar genetics and very similar molecular structures across species,” Rhodes said. “They all evolved from the same gene.”

When the researchers blocked vasotocin in one of a pair of male anemonefish, the treated males displayed significantly less aggression than their untreated counterparts. Blocking vasotocin in anemonefish fathers, however, yielded an unexpected result: The dutiful dads became even more attentive to their offspring.

“We were surprised by this because these fish display such a high level of parental effort in the laboratory that it’s hard to imagine there being an increase,” DeAngelis said. “Our hypothesis is that by blocking vasotocin signaling, you’re reducing vigilance and nest defense, allowing a greater allotted effort to be directed toward parental care.”

Whether the patterns in anemonefish also hold true for humans remains to be seen, the researchers said. Paternal care is rare in vertebrates, and mammalian fathers tend to be indifferent to the survival of their offspring, they said.

The anemonefish is particularly faithful to his mate and offspring because he’s trapped with them on a single anemone that offers the family shelter and defense, the researchers said.

But the similarities between anemonefish and other species likely outweigh the differences, they said. There is evidence, for example, that oxytocin also plays a role in human fathering.

“There has been a lot of recent research showing that these behaviors – like aggression or reproduction or parental care – are sort of ubiquitously distributed across vertebrates, and the mechanisms that promote and maintain those behaviors are similar in all species,” DeAngelis said.

“Vertebrates evolved over 400 million years, and 300 million years of that were fish,” Rhodes said. “Paternal care has very deep origins, and the molecular mechanisms or genetics of that are going to be similar across species. I think we can learn a lot from our fish ancestors.” 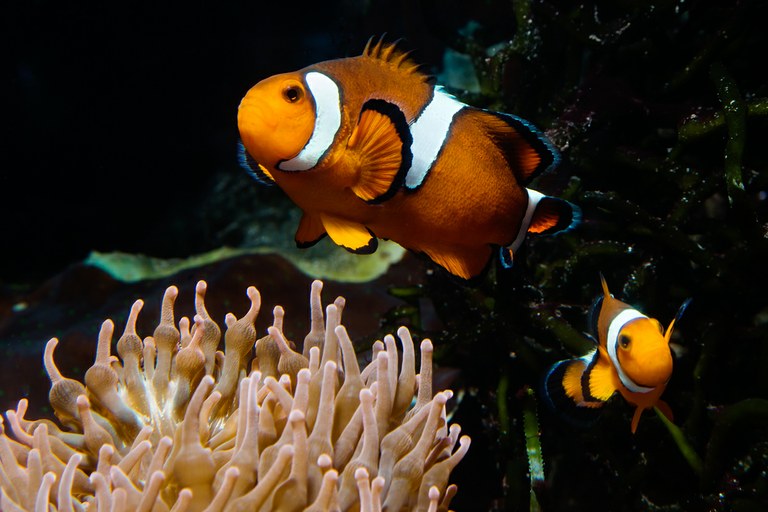 
Anemonefish females are larger and more aggressive than males, but both stay close to their anemone home. Photo by L. Brian Stauffer