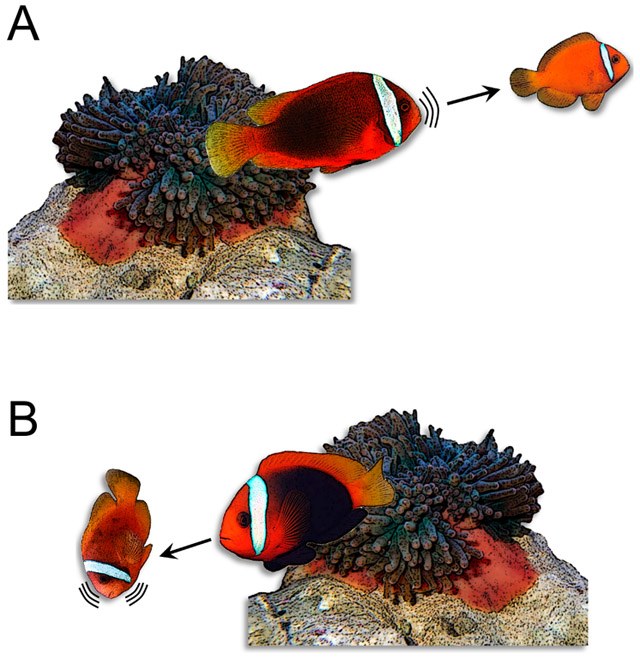 Behavioral postures associated with vocalizations and exhibited by A frenatus during agonistic interactions. A) Dominant individual chasing subordinate while producing aggressive sounds. B) Head shaking movements displayed by subordinate.


Published late last week in the journal PLoS ONE, researchers Orphal Colleye and Eric Parmentier have uncovered why clownfish make sounds in their paper titled “Overview on the Diversity of Sounds Produced by Clownfishes (Pomacentridae): Importance of Acoustic Signals in Their Peculiar Way of Life.”

Fish are known to make vocalizations and many use them for establishing both social heirarchy and for mate attraction. Clownfish in particular make a lot of vocalizations and Colleye and Parmentier wanted to know to what extent vocalizations played a part in social interactions in the clownfish family (Pomacentridae).

What the researchers found was that the sounds produced by clownfish, in this case Tomato clowns (Amphiprion frenatus) were confined to two groupings: aggressive sounds along with threatening behavior (charge and chase), and submissive sounds emitted when fish exhibited head shaking movements (i.e. a submissive posture).  The emitted sounds were correlated with fish body size with smaller fish making submissive sounds and larger fish emitting more aggressive sounds. They also noted that no distinction in sound was heard when it came to actual breeding behavior (i.e. attracting a mate).

The conclusions are important as clownfish maintain a very size-specific social structure.