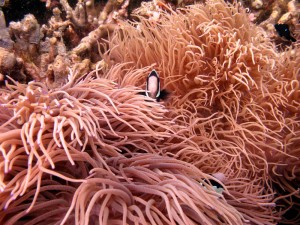 The movie Finding Nemo may have been the biggest stimulant this hobby has ever seen, and what epitomizes this phenomenon more than the clownfish and anemone combo? Since that movie hit the box office, clowns have been the inspiration behind many a reef tank, and a lot of people add anemones to help them feel at home. This symbiotic relationship serves them very well in the wild, but is it really needed, or worth the risk, in a home aquarium?

Find out after the break.

First of all, let’s look at what the symbiotic relationship between anemonefish and their host anemones entails. Clownfish are not the biggest or toughest animals on the natural reef, so they get a lot of protection from the anemone’s stinging cells. Anemones are also very susceptible to attack by a range of fish, and an anemonefish uses guerrilla tactics, darting in and out of its protective host, to keep predators away. Anemones also gain some nutrients brought back by the hosted fish.

So why would we need this in captivity? The answer, in most cases, is that we don’t.

A carefully stocked tank will have no fish that pose a danger to either the fish or the anemone, so the primary purpose is defeated, and because we feed our animals, the anemones don’t need the extra nutrients either. Clownfish of course have the built in instinct to host for protection, but they will happily host just about anything. I’ve seen them host on corals of many types, inanimate objects like pumps, flat glass walls and I currently house a clown that has taken a liking to sleeping nestled down in hair algae. 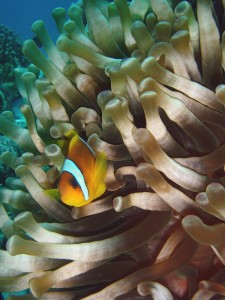 So now that we know we don’t need both to have either animal, let’s look at the risks involved. Anemones are fickle creatures that may move to get better lighting, flow or food sources which puts your corals at risk. Their powerful stinging cells have the ability to kill just about any coral, which can make a wondering anemone a very expensive problem. They are also one of the many creatures that can cause severe chemical damage to a closed reef system after death, and both of these dangers only increase with the addition of hosting fish. Hosting fish will very often decide that the host’s position is not preferential to what they want and can coax it into moving by nipping at its tentacles. Clowns can effectively push an anemone around your tank, killing coral as it goes.

With all this risk, I am not saying you shouldn’t get an anemone and anemonefish. This symbiotic behavior is rare in nature, and natural rareties are what our hobby is all about. I am only saying that if you feel compelled to get either for the sake of the other, you may be going about it all wrong.