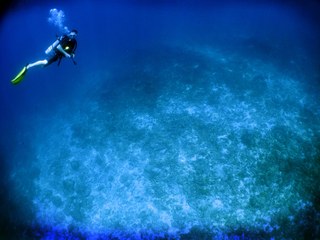 
Stanford, CA — There has been much attention given to the environmental conditions that trigger a reef’s demise due to bleaching, but little is certain about the precise cellular and molecular mechanisms of the bleaching process. New research from Carnegie’s Arthur Grossman brings into question the prevailing theory for how bleaching occurs on a molecular level. It is published in Current Biology.

Photosynthesis, the process by which plants, algae, and select bacteria convert the sun’s light energy into chemical energy, takes place in a cellular organelle called the chloroplast. It has been theorized that the major cause of bleaching is the result of chloroplast damage due to heat stress, which results in the production of toxic, highly reactive oxygen molecules during photosynthesis.

Grossman and his team—led by Carnegie’s Dimitri Tolleter and in collaboration with John Pringle and Steve Palumbi of Stanford University—demonstrated that bleaching still occurs if the algae are heat stressed in the dark, when the photosynthetic machinery is shut off. This is surprising since it means that toxic oxygen molecules formed in heat-damaged chloroplasts during photosynthetic reactions during the light are likely not the major culprits that cause bleaching.

Therefore other, as yet unexplored, mechanisms for bleaching must exist. This work suggests the existence of potentially novel mechanisms associated with coral bleaching. A mechanistic understanding of bleaching is critical for developing strategies to mitigate or eliminate the problem of coral decline.

The process of coral bleaching in the dark at elevated temperatures—and perhaps also in response to other stress conditions—could be a potential advantage to corals.

Grossman explains: “One theory that we are exploring is that under heat-stress conditions the corals eject the algal symbionts at night in order to avoid the production and accumulation of photosynthetically-derived toxic oxygen molecules during the day. If such molecules were to accumulate, they would threaten the viability of both the alga and its host.”

The team’s study also suggest that certain strategies proposed to protect reefs, such as shading the corals from high light, may not prevent high temperature-triggered bleaching (because bleaching would still occur in the dark). Clearly there is a need for more thorough molecular analyses to establish the various molecular causes of the bleaching processes.

Additionally, Grossman and Tolleter’s work revealed some key details, such as the breakdown of specific parts of the photosynthetic apparatus when the corals are stressed. This process can be monitored and may potentially serve to evaluate the health of the reef and the risk of bleaching and death.