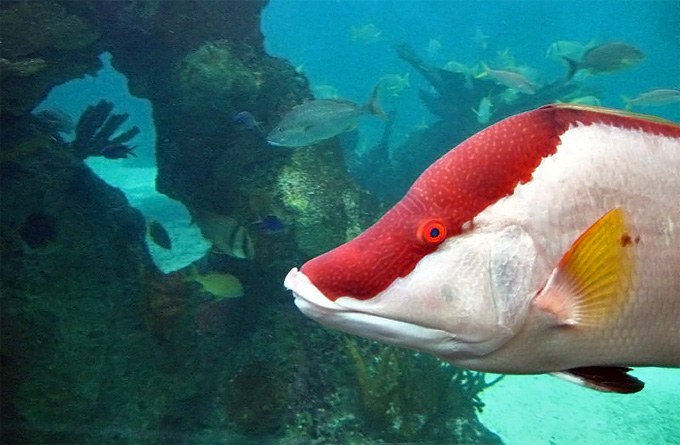 This koi-like hogfish can change its skin colors based on what its skin “sees.”


How the Color-Changing Hogfish ‘Sees’ With Its Skin

by Robin A. Smith [via Duke University]

Some animals are quick-change artists. Take the hogfish, a pointy-snouted reef fish that can go from pearly white to mottled brown to reddish in a matter of milliseconds as it adjusts to shifting conditions on the ocean floor.

Scientists have long suspected that animals with quick-changing colors don’t just rely on their eyes to tune their appearance to their surroundings — they also sense light with their skin. But exactly how “skin vision” works remains a mystery.

Now, genetic analysis of hogfish reveals new evidence to explain how they do it. In a new study, Duke University researchers show that hogfish skin senses light differently from eyes.

A pointy-snouted reef fish called the hogfish can change from white to spotted brown to reddish depending on its surroundings. Photos courtesy of Dean Kimberly and Lori Schweikert.

With “dermal photoreception,” as it is called, the skin doesn’t enable animals to perceive details like they do with their eyes, Schweikert said. But it may be sensitive to changes in brightness or wavelength, such as moving shadows cast by approaching predators, or light fluctuations associated with different times of day.

Schweikert, Johnsen and Duke postdoctoral associate Bob Fitak focused on the hogfish, or Lachnolaimus maximus, which spends its time in shallow waters and coral reefs in the western Atlantic Ocean, from Nova Scotia to northern South America. It can make its skin whitish to blend in with the sandy bottom of the ocean floor and hide from predators or ambush prey. Or it can take on a bright, contrasting pattern to look threatening or attract a mate.

The key to these makeovers are special pigment-containing cells called chromatophores, which, when activated by light, can spread their pigments out or bunch them up to change the skin’s overall color or pattern.

The researchers took pieces of skin and retina from a single female hogfish caught off the Florida Keys and analyzed all of its gene readouts, or RNA transcripts, to see which genes were switched on in each tissue.

Previous studies of other color-changing animals including cuttlefish and octopuses suggest the same molecular pathway that detects light in eyes may have been co-opted to sense light in the skin.

But Schweikert and colleagues found that hogfish skin works differently. Almost none of the genes involved in light detection in the hogfish’s eyes were activated in the skin. Instead, the data suggest that hogfish skin relies on an alternative molecular pathway to sense light, a chain reaction involving a molecule called cyclic AMP.

Just how the hogfish’s “skin vision” supplements input from the eyes to monitor light in their surroundings and bring about a color change remains unclear, Schweikert said. Light-sensing skin could provide information about conditions beyond the animal’s field of view, or outside the range of wavelengths that the eye can pick up.

Together with previous studies, “the results suggest that fish have found a new way to ‘see’ with their skin and change color quickly,” Schweikert said.