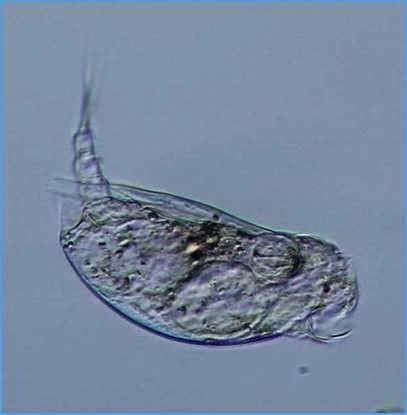 This post is in response to requests for more information about Colurella adriatica.  As previously stated, we’ve examined salinity and found that although they tolerate a wide range, optimal performance is at 15-20 g/L (ppt).  For feeding marine fish larvae this is likely going to be the culture salinity as acute acclimation to full strength seawater is good and this will save on salt.  Colurella also grows well at 5 g/L and therefore when growing them for freshwater fish, this is the recommended salinity.  Thus far, attempts to grow Colurella in 0 g/L freshwater have yielded poor results.  The only other culture parameter tested so far has been diet.  An industry partner works as a microbiologist and isolates bacteria.  He had some freeze-dried bacteria that he wanted us to test.  When solely fed freeze-dried bacteria the Colurella populations survived.  When compared to those Colurella fed algae paste (Nanno 3600™; Reed Mariculture), the ones fed freeze-dried bacteria initially grew better than those fed paste.  However, after 4 days the Colurella fed paste had significantly greater growth.  The results of this trial are still being evaluated, as is optimal diet, but Colurella’s ability to be fed, and survive on, freeze-dried bacteria seems feasible.  Other culture parameters haven’t been tested yet, but we keep our populations at ~78° F with gentle aeration and can reach ~500 rotifers per mL with a population growth rate half of what is achieved with Brachionus sp. rotifers.  Hopefully, once we know more about this species we can increase the population density and growth rate. As stated in a previous post, Colurella has been fed to MORE:Colurella adriatica update