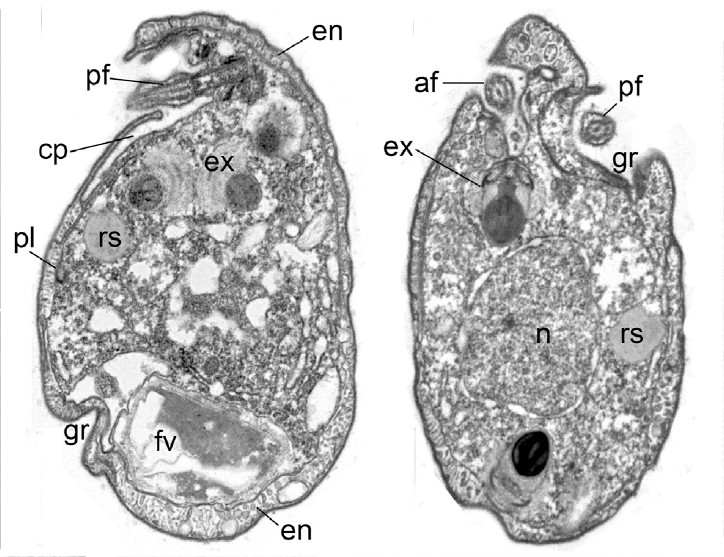 Ancoracysta twisti is very small, consisting of just a single cell 14 μm in length, but it’s discovery is proving to be quite large. This newly described species was found living upon an unidentified brain coral at the Birch Aquarium after researchers sampled its mucus in an effort to study the microorganisms that call such a place home. Specimens were grown for eight months in Petri dishes (though it’s apparently not clear what they were surviving on during this time), after which they were transferred into new dishes and fed Procryptobia, a type of single-celled flagellate.

Morphologically, Ancoracysta is a bit unusual, possessing a type of organelle that has never been seen before. This structure, dubbed an “ancoracyst” for its anchor-shaped cap, is analogous to the nematocysts found in cnidarians. It sits at the anterior end of the creature and is exerted to capture prey, though precisely how this functions is yet unknown. Within the organelle’s spherical dimensions sits seven oblong structures that discharge in some manner to subdue the eukaryotic cells that make up its diet. No doubt, this is a terrifying predator, albeit at a microscopic scale.

However, it was only when the DNA of Ancoracysta was sequenced that its uniqueness truly became apparent, as it seems to occupy a completely novel lineage in the vast tree of eukaryotic life. This is akin to discovering a new phylum (or perhaps even a superphylum), illustrating perfectly just how partial our understanding is of the world’s microbiome. It’s closest relatives appear to the haptophytes, a diverse lineage of flagellated algae that includes the ubiquitous coccolithophores of the marine plankton, as well genera like Pavlova and Isochrysis that are relied upon heavily in mariculture.

There’s a very good chance that Ancoracysta is a common inhabitant of reef aquariums, inconspicuously flagellating around corals and live rock like some tiny lion of the aquatic Serengeti. For those with access to a good microscope, it’s swimming style is described as a “fast twirling movement” that “frequently change[s] direction”. An agile hunter indeed…