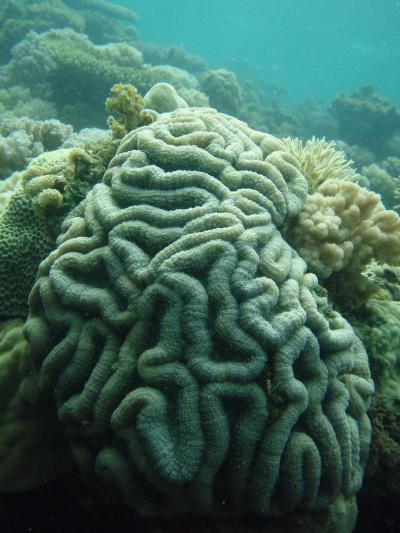 
Researchers from the Wildlife Conservation Society have developed a “stress test” for coral reefs as a means of identifying and prioritizing areas that are most likely to survive bleaching events and other climate change factors. The researchers say that these “reefs of hope” are priorities for national and international management and conservation action.

The test is a model that looks at environmental factors that stress corals – mainly from rising sea temperatures – and how these stresses affect overall coral and fish diversity. The results will help conservationists and managers identify reef systems most likely to survive over the next 50 years.

The study appears in the online edition of Global Change Biology. The authors include Tim R. McClanahan, Joseph M. Maina, and Nyawira A. Muthiga of the Wildlife Conservation Society.

The model uses layers of historical data, satellite imagery, and field observations to produce a composite map on the status of reefs in the western Indian Ocean, in addition to an index of coral communities, their diversity, and their susceptibility to bleaching.

The study encompasses a wide swath of the western Indian Ocean, ranging from the Maldives to South Africa, an area already heavily impacted by bleaching events and coral mortality.

The model identified the coastal regions stretching from southern Kenya to northern Mozambique, northeastern Madagascar, the Mascarene Islands, and the coastal border of Mozambique and South Africa as having the most promising characteristics of high diversity and low environmental stress.

The authors say these biologically diverse and hardy reefs are therefore a priority for implementing management that will reduce human impacts and stresses, while alternative strategies for adaptation are necessary in areas with lower chances of long-term survival.

“The future is going to be more stressful for marine ecosystems, and coral and their dependent species top the list of animals that are going to feel the heat of climate warming,” said Dr. McClanahan, the study’s lead author and WCS Senior Conservationist. “The study provides us with hope and a map to identify conservation and management priorities where it is possible to buy some time for these important ecosystems until the carbon emissions problems have been solved.”

The coral reefs of the western Indian Ocean represent a significant portion of the overall biodiversity of tropical reef systems worldwide.

The western Indian Ocean also represents a crucial testing ground for management responses to climate-driven events such as coral bleaching. For instance, an estimated 45 percent of living coral was killed during 1998’s warm temperature anomaly.

Caleb McClennen, Director of the Wildlife Conservation Society’s Marine Program, said: “Reducing human impacts to minimize the multiple stressors on these globally important reefs will give corals a fighting chance in the age of global climate change. These results reveal a window of opportunity for the future conservation of the ocean’s most biodiverse ecosystem.”