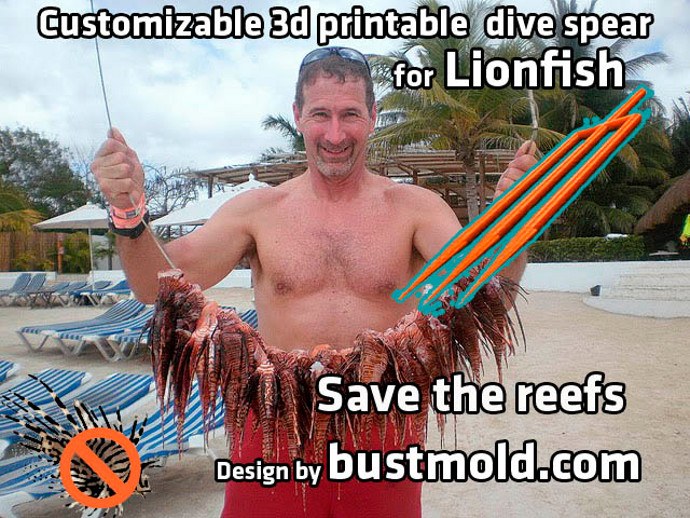 
In past blog posts, I discussed uses for 3D printing in our hobby – from fragging coral to fish breeding to even printing your own liverock.  One intrepid member of Thingiverse – a site for sharing 3D printable “things” – took it a step further. He decided to do something about the lionfish population on his latest trip to Cuba using his 3D printer so he designed and printed a lionfish spear: http://www.thingiverse.com/thing:54756 The member’s name is Michael G. and he goes by the name “Mold Busters” on Thingiverse.

After seeing the design pop up in my news feed, I decided to get in contact with Michael to learn more about how he was going to use his lionfish spear and to report back after his trip. Below is his response along with some awesome photos of his dives:

Like any other creature in the world’s vast array of living beings, the lionfish is both beautiful and fascinating. Native to the tropical Pacific and Indian oceans where it lives in unison with its environment, the lionfish has large, spiky, and venomous fins, which it uses to corner its prey and defend itself against predators.

The problem with lionfish, however, is that recently their numbers have been growing uncontrollably in the Atlantic Ocean. This is believed to be the result of their introduction into the Atlantic and Caribbean by local aquariums or fish collectors in the early 1990s.

With no natural predators in the area, lionfish have, since then, quickly multiplied out of control and become a serious threat to marine life in the Atlantic. You can now find them throughout much of the Caribbean Sea and as far as Rhode Island.

Luckily, there are ways that lionfish populations can be controlled, mainly by encouraging diving enthusiasts to hunt these fish during their dives. According to Dr. Dayne Buddo of the Discovery Bay Marine Lab at UWI, removing just 20 lionfish from the Atlantic would equate to saving about 300,000 other fish over a period of one year.

After reading about the lionfish problem and becoming concerned about the well-being of the marine environment, the Mold Busters team decided to do something about it. So, before embarking on their next holiday (a diving adventure in Santiago de Cuba), Mold Busters designed the world’s first 3D-printable dive spear. Check it out here: http://www.thingiverse.com/thing:54756.

They used this spear during their dives and successfully killed over 50 lionfish—saving approximately 750,000 fish from the invasive lionfish species!!! With this revolutionary new tool, every diving enthusiast can do his/her part to save the native species and coral reefs of the Atlantic Ocean.