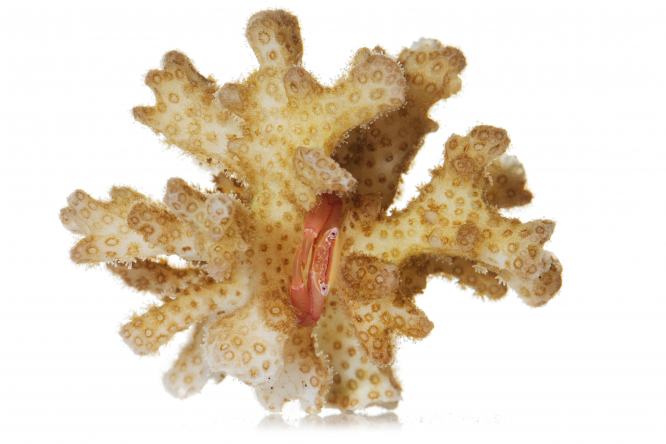 Coral reefs face a suite of perilous threats in today’s ocean. From overfishing and pollution to coastal development and climate change, fragile coral ecosystems are disappearing at unprecedented rates around the world. Despite this trend, some species of corals surrounding the island of Moorea in French Polynesia have a natural protector in their tropical environment: coral guard-crabs. New research from the National Museum of Natural History’s Smithsonian Marine Station scientist Seabird McKeon and the museum’s predoctoral fellow Jenna Moore of the Florida Museum of Natural History has helped unravel the complex symbiotic relationship between these crabs and the coral reefs they live in and defend. Details from this study are published in the Sept. 30 issue of the open-access journal, PeerJ.

The new research highlights the role of diversity in the healthy functioning of coral reef ecosystems and shows that guard-crab species and size classes offer different kinds of effective protection against various threats to coral reefs.

“We found that diversity in both species and size of coral guard-crabs is needed to adequately fend off coral predators,” said McKeon. “It is an example of how biodiversity is crucial to conserving reef environments and the essential resources they provide for thousands of species, including humans.”

Coral guard-crabs belong to the genus Trapezia and defend their habitat in coral reefs from predators called corallivores in exchange for shelter and nutrition. In 2008 and 2009, four species of coral guard-crabs known to protect coral from predator sea stars were studied in a series of experiments to examine the effectiveness of different species and various sizes of crabs at repelling multiple corallivores. At the time, crown-of-thorns sea stars, which can grow to the size of a trashcan lid and decimate coral reefs, experienced a population boom on Moorea, threatening the entire reef community found there.

In one trial, the research team selectively removed the largest species of coral guard-crab, T. flavopunctata, from corals in the path of the army of sea stars and observed the effects. The results were dramatic; corals without guard-crabs, or with other species of guard-crab, were eaten—usually overnight.

“Seemingly small differences among crabs guarding their coral homes can have big effects on coral survival,” said Moore. “Not only does the level of protection provided vary by species, but the smallest crabs were defending the coral from coral-eating snails, a threat that larger crabs ignored.”

The team concluded that multiple lines of defense are a direct result of guard-crab diversity and will be necessary to keep coral reefs safe long-term. Additional surveys revealed that the host corals were not the only species that benefitted from the diverse guard-crab ecosystem. Small corals of other species sheltering in the shadow of the crab-coral symbiosis were also shielded from corallivore predation.

Coral reefs have long protected humans living in coastal areas, acting as barriers again storms, wave damage and erosion. They are also a rich source of food for people around the globe, providing habitat and nurseries for as much as one-quarter of all ocean species. As waters to continue to warm and ocean acidification changes the chemistry of the Earth’s marine systems, corals, and the incredible diversity of life they support, are at risk of vanishing.

The Smithsonian Marine Station in Ft. Pierce, Fla., is a research center specializing in marine biodiversity and ecosystems. The Marine Station, a facility of the National Museum of Natural History, draws scientists and students from the Smithsonian and collaborating institutions to investigate the plants, animals and physical processes in the ocean and Indian River Lagoon.