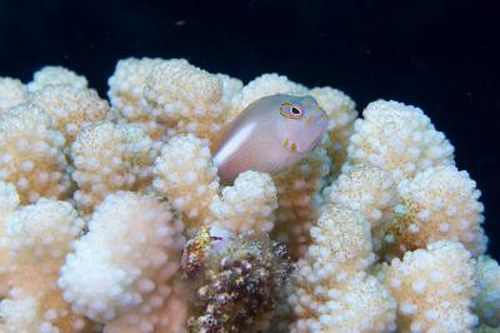 This is an underwater photograph of coral and the life the it supports near Lizard Island. Credit: Carnegie Institution for Science President Matthew P. Scott

In a quest for historical context on the peril facing coral reefs, the team compared current measurements of the growth rate of a section of Australia’s Great Barrier Reef with similar measurements taken more than 30 years ago. Their work is published in Geochimica et Cosmochimica Acta.

Coral reefs are havens for biodiversity and crucial for the economies of many coastal communities. But they are very sensitive to changes in ocean chemistry resulting from human activity. Since the beginning of the Industrial Revolution about one-third of the carbon dioxide, CO2, which has been released into the atmosphere from fossil fuel combustion and land use change has been absorbed by the oceans, where it damages coral reefs.

Coral reefs use a mineral called aragonite to make their skeletons, a process called calcification. It is a naturally occurring form of calcium carbonate, CaCO3. When carbon dioxide from the atmosphere is absorbed by the ocean, it forms carbonic acid, H2CO3, which makes the ocean more acidic and decreases its pH. This makes it more difficult for many marine organisms to grow their shells and skeletons, and threatens coral around the globe.

Recent studies have shown a reduction in individual coral growth in the Great Barrier Reef, southern Thailand, and the central Red Sea of between 13 percent and to 24 percent over the last few decades. But well-characterized observations of carbonate chemistry trends weren’t made at those sites, so it isn’t possible to draw a direct line of causality between the acidification of the ocean and a decline in coral skeleton building.

This is an overhead view of reefs near Lizard Island.

In order to establish a cause-and-effect relationship between acidification and decreased calcification, a team led by Carnegie’s Ken Caldeira and including Carnegie’s Jacob Silverman (the lead author) and Kenneth Schneider, formerly of Carnegie, compared measurements of the rate of calcification in one segment of Australia’s Great Barrier Reef called Bird Island that were taken in between 1975 and 1979 to those made at the neighboring Lizard Island in 2008 and 2009.

However, the team was not able to demonstrate a change in the amount of live coral covering the reef structure over the three decade period.

If the reef in Australia is as sensitive to ocean acidification as was estimated by lead author Jack Silverman of Israel Oceanographic & Limnological Research Ltd in his previous work in Israel, then the increase in ocean acidification would be sufficient to explain the 40 percent decline.

Previous work by the group projected that all of the reefs in the world may be dissolving in a few decades if current carbon dioxide emission trends continue.

“Coral reefs are getting hammered,” said Caldeira. “Ocean acidification, global warming, coastal pollution, and overfishing are all damaging coral reefs. Coral reefs have been around for millions of years, but are likely to become a thing of the past unless we start running our economy as if the sea and sky matters to us very soon.”