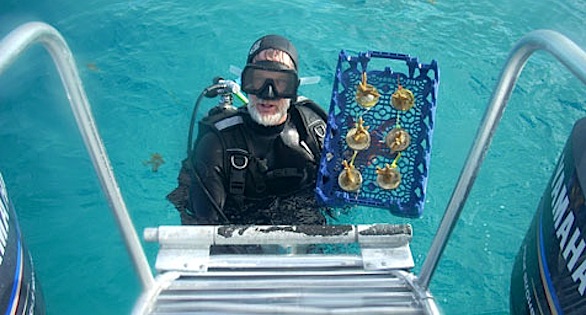 In 1977, a major cold front struck the southeastern seaboard of the U.S. Snow fell in the Florida Keys and the water temperatures plunged in that normally tropical environment. Ken Nedimyer, a young reef fish collector from Key Largo, bore witness to the first of several events that, collectively, would drive the region’s most dominant species of coral to the brink of extinction. Over the next three decades, Nedimyer’s life and the lives of his state’s threatened coral reefs have been inexorably intertwined as he, and others who share his passion for Florida’s diverse reef environment, have struggled to make sense of the mass die-off of some of the Keys’ oldest and best-adapted aquatic residents. For Nedimyer, just understanding this new phenomenon was not enough. His objective from the outset was to use that understanding to stop and ultimately reverse this destructive process. “Ken Nedimyer is a real-life aquaculture action hero,” says Jeff Turner, head of Reef Aquaria Design, the creator of the Smithsonian Institution’s critically acclaimed new 1,500-gallon reef aquarium. “He is doing something for our reef systems every day. He is not just talking about it.” Dead Elkhorn Coral on Molasses Reef, which Nedimyer hopes to restore. Such praise for a marine fish and invertebrate collector is significant—especially in Florida, where such activities are often viewed with great skepticism. But for all who know him, Nedimyer is one of those special individuals who puts much more into preserving and restoring Florida’s fragile reef environment than he could ever remove as a commercial collector of marine organisms for the aquarium trade. Turner cites, as an example, Nedimyer’s establishment of one of the world’s first live-rock nurseries off Tavernier Key in 2001. Nedimyer was given state and federal permits to MORE: CORAL Interview: Ken Nedimyer