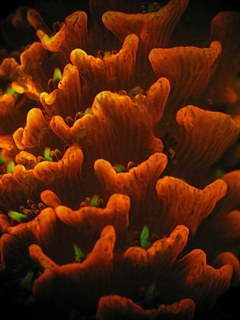 
Research published on January 26, 2011 online in the Proceedings of the Royal Society B: Biological Sciences1 reports that scientists have discovered that when studying Acropora millepora they could statistically predict the settling behavior of the coral larvae based on the fluorescing proteins found in the larvae.

According to their data, A. millepora with significantly higher amounts of red fluorescing proteins are more likely to stay suspended in the water column and not settle out when given settling cues compared to their green fluorescing counterparts.  They are also reporting that based on this behavior that it might allow researchers to better understand the life history changes of corals and to learn more about physiology changes to corals due to coral warming.