A new study performed by partners of the ARC Center for Excellence Coral Reef Studies (Coral CoE) has found that with increases in ocean temperatures coral larvae are remaining closer to home. “We found that at higher temperatures more coral larvae will tend to stay on their birth reef,” said the lead author of the study Dr Joana Figueiredo from the ARC Centre of Excellence for Coral Reef Studies at James Cook University. With global warming affecting environments far and wide this is “good news in an otherwise cloudy picture for isolated reefs, because in the future they will be able to retain more of their own larvae and recover faster from severe storms or bleaching events,” added Figueiredo. 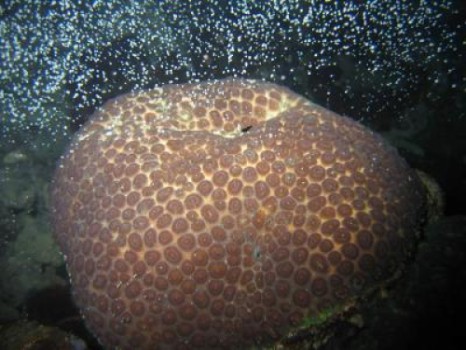 While it is clear the more larvae that remains near a reef will colonize that reef, it is very apparent that the dispersal of larvae throughout the vast ocean currents is reduced as a result. “The loss of connectivity can make reef systems such as the Great Barrier Reef  more vulnerable, so interconnected reef systems that depend on the recruitment of coral larvae may take more time to recover after a disturbance, such as a cyclone, because fewer larvae will disperse from other reefs to the disturbed reef.” Photo Credit: Andrew H. Baird -Goniastrea aspera is shown releasing egg sperm bundles. Read more here!