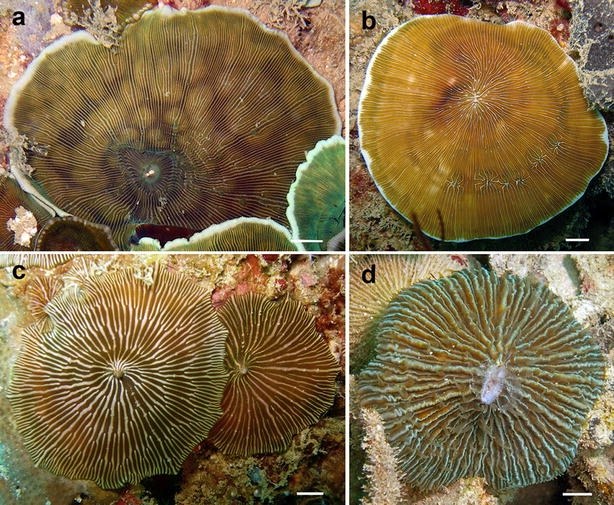 
Corallimorpharians, better known as mushroom corals in the hobby, are closely related to scleractinian corals.  They in general have a short, narrow column which then expands into a wide, flat oral disc and their tentacles are normally either short or absent based on the species.  Due to their morphology, they are very hard to identify and many have not even been described yet.

During a biodiversity study led by Waheed and Hoeksema of the Netherlands Centre for Biodiversity Naturalis and the Borneo Marine Research Institute of Sabah, Malaysia, researchers noticed a number of corallimorpharians that resembled certain local scleractinian corals.

Some had disc-like growth forms and radial color patterns similar to those of small-sized corals of the agariciid Leptoseris glabra (Fig. 1a, b) or the fungiid Danafungia scruposa (Fig. 1c, d), which were not in their close proximity.  In scleractinians, the radial stripes reflect the position of septa, which are lacking in Discosoma. Without further evidence, it is uncertain whether this likeness helps the corallimorpharians to be inconspicuous to potential prey or to avoid predation, as in Müllerian mimicry.