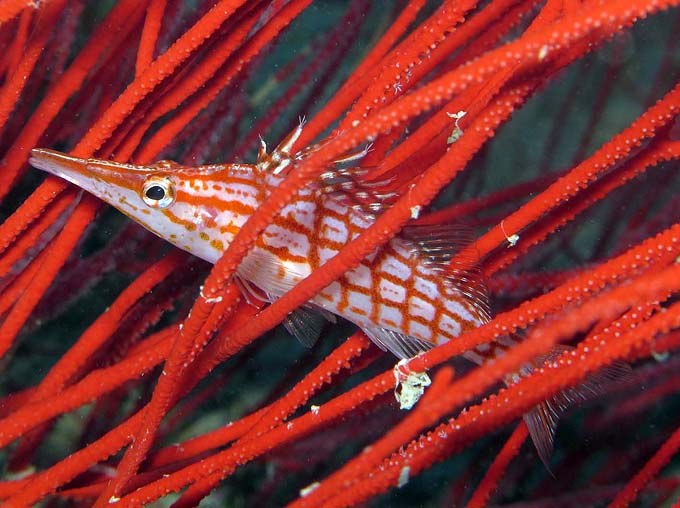 Longnose hawkfish (Oxycirrhites typus) are rich with personality, and their behavior grants us insight about why other animals behave the way they do. Photo by Lakshmi Sawitri


After reviewing recent research based on the study of habitat-specialist coral reef fishes, Boston University post-doctoral researcher Marian Y. L. Wong and Peter M. Buston, assistant professor of biology, have found that these species have proven invaluable for experimental testing of key concepts in social evolution, noting that studies of these fishes already have yielded insights about the ultimate reasons for female reproductive suppression, group living, and bidirectional sex change.  Based on this impressive track record, the researchers maintain that these fishes should be the focus of future tests of key concepts in evolutionary ecology. Their findings are published in an article titled “Social Systems in Habitat-Specialist Reef Fishes: Key Concepts in Evolutionary Ecology” in the June 2013 issue of the journal BioScience (BioScience 63: 453–463. ISSN 0006-3568, electronic ISSN 1525-3244; www.ucpressjournals.com/reprintinfo.asp. doi:10.1525/bio.2013.63.6.7)

A major focus in evolutionary ecology lies in explaining the evolution and maintenance of social systems. Although most theoretical formulations of social system evolution were initially inspired by studies of birds, mammals, and insects, incorporating a wider taxonomic perspective is important for testing deeply entrenched theory. In their new study, the researchers suggest that habitat-specialist coral reef fishes provide that wider perspective.

“While such coral reef fishes are ecologically similar, they display remarkable variation in mating systems, social organization, and sex allocation strategies,” says Wong. “Our review of recent research clearly shows the amenability of these fishes for experimental testing of key concepts in social evolution.”

The new study highlights recent contributions made by one specific group of coral reef fishes—habitat-specialist reef fishes—to testing the robustness of mating system, cooperative breeding, and sex allocation theories. Habitat-specialist reef fishes are small bodied and well adapted to living within discrete patches of coral, anemones, and sponges. They include such species as the Pomacentridae (damselfish), Gobiidae (goby), Caracanthidae (coral croucher), and Cirrhitidae (hawkfish) families.

Being habitat specialists, these fishes are highly site attached and have limited mobility. They rely on their particular habitat for food, shelter, and breeding sites, and they experience high risks of mortality from predation if they venture outside their immediate habitat. Mating systems are highly variable both among and within these species, including monogamy (one male mates with one female), harem polygyny (one male mates with several females), and polygynandry (multiple males and females mate with each other). These fishes also exhibit great variability in social organization, including pair and group formation, with group members’ being reproductive or non-reproductive depending on the mating system. “This behavioral variability, despite the relative ecological similarity of these species, presents a unique opportunity to test the various hypotheses for the evolution of different social systems,” says Buston.

According to the authors, habitat-specialist reef fishes are a tried and tested group of model organisms for advancing the understanding of the evolution and ecology of social systems in animals; the study of these species already has revealed many things about the evolutionary ecology of mating, social, and sexual systems. Despite their ecological quirkiness, they have been instrumental for testing the generality and robustness of key concepts that are widely applicable to other taxonomic groups. In fact, in some cases, they have been the only species in which experimental tests of key hypotheses have been performed, largely because of the ease with which their habitat and social organization can be manipulated in the lab and in the field. For these reasons, the authors argue that these species should be the focus of future tests of key concepts in evolutionary ecology.

[via the Boston University newswire]