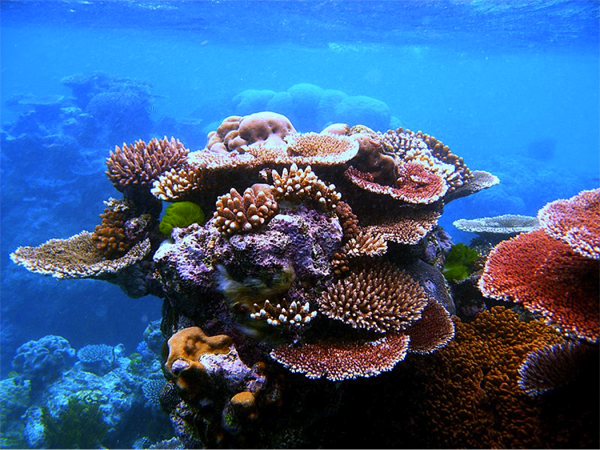 Coral reefs are by far the most diverse marine ecosystems, housing about a quarter of all marine species, though they occupy only 284,000 km2—a mere 0.08% of the area of the world’s oceans. Many coral reefs are still relatively healthy and spectacularly beautiful, like the one pictured above, whereas 20% of the world’s reefs have been effectively destroyed by a variety of human activities and another 24% have been severely damaged, like the one pictured below (see Status of Coral Reefs of the World: 2004). 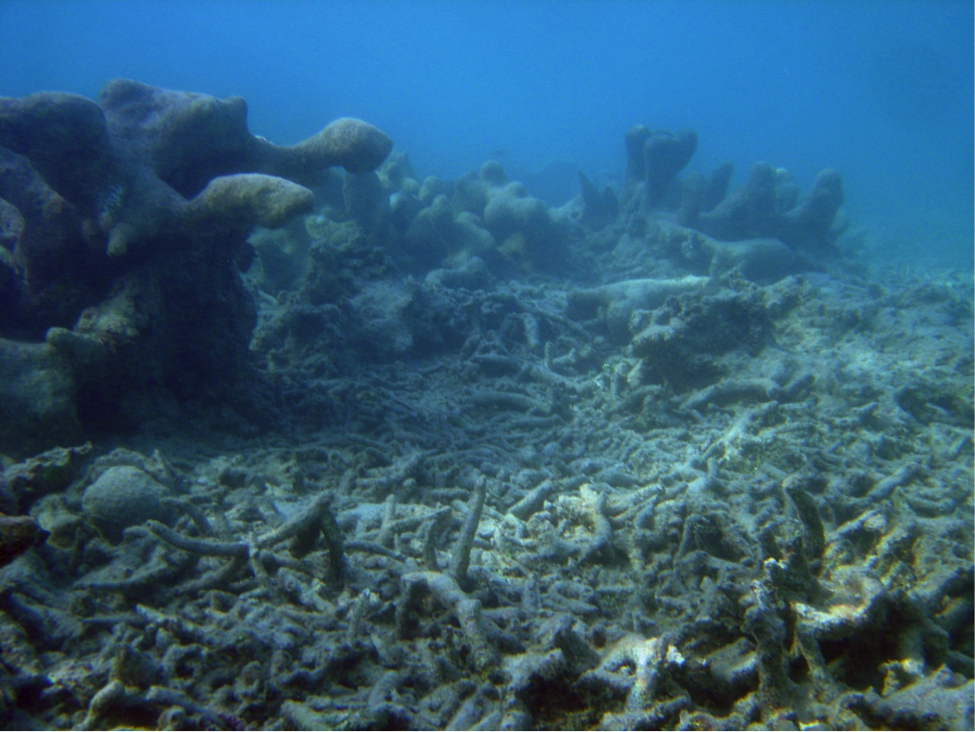 Several different kinds of activities are responsible for causing damage to coral reefs. Deforestation and poor land-use practices allow erosion, smothering reefs in mud. Coastal pollution with pesticides, herbicides, fertilizers, petroleum, and other substances stresses and even kills corals and other reef organisms. Overfishing of herbivores allows algae to overgrow and kill some corals, and prevents coral larvae from successfully settling and growing to adult size. Destructive fishing practices such as dynamite or cyanide fishing or dredging directly destroys reefs. While all of these activities have caused or contributed to coral reef damage, they operate principally at local scales. Hence, protecting a local reef from these pressures brings the biggest benefit to that local reef, whereas failing to do so brings the biggest cost to the same reef.

Climate change and (likely) ocean acidification are also major drivers of coral reef health. The major cause of climate change today is the release of carbon dioxide from human sources, which enhances the natural greenhouse effect and leads to warming. Elevated temperature leads to coral bleaching, coral disease outbreaks, reduced reproductive success and often coral death. For example, 16% of the world’s corals died as a result of the 1998 global bleaching event. Ocean acidification can reduce coral growth rates and also appears to interfere with reproduction in many marine species, including corals. However, the effects of climate change and ocean acidification we’ve seen thus far are small potatoes compared to what we will see this century if we don’t address carbon dioxide emissions. During the last century temperatures on coral reefs increased by an average of 1-2 °F whereas seawater pH decreased by an average of 0.1 units. Unrestrained carbon dioxide emissions will cause an additional 5-7 °F increase and 0.4 pH unit decrease on reefs by the end of the century.

Over the last several years a few widely publicized papers have appeared in the scientific literature which have suggested coral reefs worldwide are likely doomed to total collapse sometime between the 2020’s and 2050’s, at least without cuts in carbon dioxide emissions that are much more aggressive than what society may be willing to achieve. That is as depressing a possibility as I can imagine. There’s no question that elevated temperature and perhaps reduced pH has caused damage to many coral reefs, and that more of each will cause a lot more damage still—those are plain facts—but the relative uniformity of decline projected by some studies has seemed to be a bit off to many of us in the coral reef research community.

A refreshing change of pace appears in the latest issue of the journal Science in a review article entitled “Projecting coral reef futures under global warming and ocean acidification” by Pandolfi et al. A subscription is required to view the entire paper, so newspaper articles discussing this paper can be read here, and a brief discussion of some of these concepts which I recently penned can be found here. As Pandolfi et al. discuss, we know beyond a shadow of doubt and from many lines of evidence that rapid climate change and ocean acidification (which result from a large pulse of carbon dioxide) present a major challenge to many coral reef species. However, important differences exist among coral reefs in different regions in terms of their species diversity, the genetic diversity within species, and the intensity of other stressors. All of these conditions affect how resilient individual reefs will be to climate change and ocean acidification. As Dr. Pandolfi says, “A considered view of all the most recent evidence suggests that some coral reef systems will decline more rapidly – especially those subject to other human pressures such as overfishing – while others may change in composition, but manage to persist for longer….We can’t say everywhere is doomed in two decades because CO2 is this level and pH is that level; it’s just not that black and white.”

We can already see some of the ramifications of these differences today. About 40% of the reefs damaged by the 1998 bleaching event largely recovered or were on their way toward recovery 5-10 years after the event. In contrast, the reefs of the Galapagos that were damaged by the 1983 bleaching event have hardly recovered at all since then. Realistic recovery times after a major disturbance for different reefs vary from as little as 5-10 years to as much as hundreds of years. Nonetheless, the emerging picture is that it is not too late to save at least some of the world’s reefs, if we get serious about cutting carbon dioxide emissions and protecting reefs from overfishing, sedimentation, and coastal pollution that is. As Dr. Sean Connolly, one of the co-authors of the paper says, “There is no doubt that unchecked global warming would have a devastating effect on the world’s reefs….If we do nothing, by later this century then all bets are off.” The good news is that there is a lot we can still do.