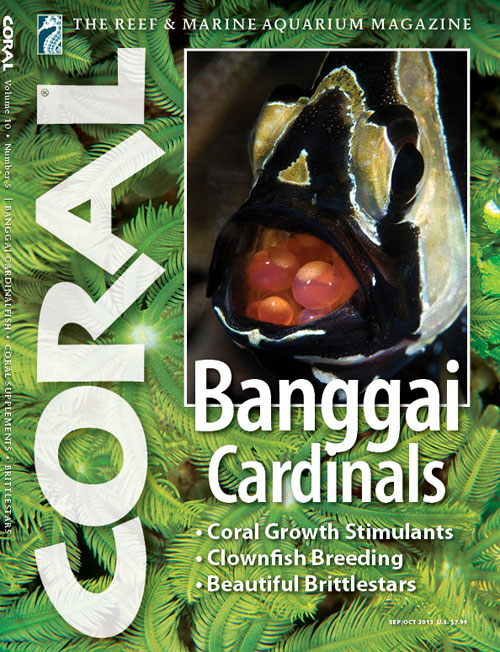 From a virtual unknown in a remote archipelago in Indonesia, the Banggai Cardinalfish became an overnight sensation among marine aquarists and, now 20 years later, its striking beauty, bold attitude and fascinating breeding habits keep it in the perennial listing of top10 most-sold saltwater aquarium fishes. CORAL Magazine September/October 2013 Issue. Click to enlarge. The next issue of CORAL will bring a special report on the state of Pterapogon kauderni in its home waters, as seen by the Banggai Rescue Project Science Expedition composed of marine biologists from the United States and Indonesia. The fish is officially listed as “Endangered” by the IUCN, but what is really happening to wild stocks? Can small-scale breeding efforts by marine aquarists help lighten the impacts of wild collection? Look to the next issue of CORAL for an exclusive excerpt from the forthcoming The Banggai Cardinalfish book. Almost two years in the making, the book was writtten MORE: CORAL September/October 2013 Preview