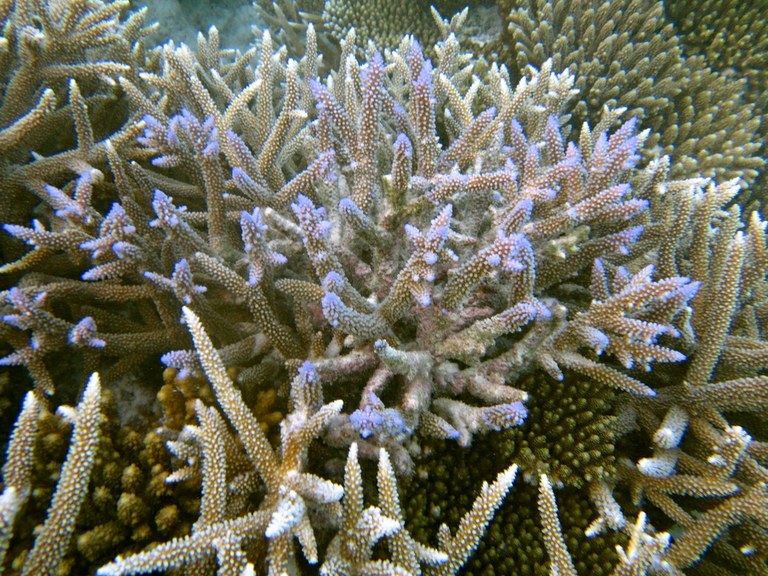 
The corals themselves play a role in their susceptibility to deadly coral bleaching due to the light-scattering properties of their skeletons. No one else has shown this before.

Using optical technology designed for early cancer detection, the researchers discovered that reef-building corals scatter light in different ways to the symbiotic algae that feed the corals. Corals that are less efficient at light scattering retain algae better under stressful conditions and are more likely to survive. Corals whose skeletons scatter light most efficiently have an advantage under normal conditions, but they suffer the most damage when stressed.

The findings could help predict the response of coral reefs to the stress of increasing seawater temperatures and acidity, helping conservation scientists preserve coral reef health and high biodiversity.

The study of nearly a hundred different species of reef-building corals, including many from the 1893 World’s Fair in Chicago, was published this week in PLOS ONE. The open-access, online journal is published by The Public Library of Science.

“We have solved a little piece of the puzzle of why coral reefs are bleaching and dying,” said Luisa A. Marcelino, who led the study. “Our research is the first to show light-scattering properties of the corals are a risk factor.”

Marcelino is a molecular biologist and research assistant professor of civil and environmental engineering at Northwestern.

The unusual research involved marine biology, the physics of light transport, the biophysics of how corals handle light and unique technology originally developed for medical applications. The team included Vadim Backman, a physicist and professor of biomedical engineering at Northwestern, and Mark W. Westneat, a coral reef fish biologist and curator of zoology at the Field Museum.

“Coral reefs are like the rain forests of the oceans — the consequences will be catastrophic if coral reefs are lost in great numbers,” said Backman, who invented the optical technique used by the team. “Corals are also optical machines. By identifying how much light the skeletons of individual coral species reflect, we have learned which species are more resilient under stress.”

Algae provide nutrients to the corals and receive shelter and light for photosynthesis in return. When stressed, the corals can lose their algae. The corals often die of starvation shortly afterward, exposing their white skeletons.

The team used LEBS to measure light transport and light amplification inside the skeletons of 96 different coral species. How fast the light amplification increases with the loss of algae depends on the light transport at the microscale. This was impossible to measure until Backman’s low-coherence enhanced backscattering (LEBS) technique became available, which is one of the reasons why this phenomenon has never been studied before.

The specimens were from long-held collections of corals from the Field Museum, including dozens retained from the original Chicago Columbian Exposition and World’s Fair of 1893, and the Smithsonian Institution.

The researchers created a family tree of corals that showed bleaching is associated with the physics of light scattering across the entire evolutionary history of corals. Living reef corals are thought to have originated about 220 million years ago, and corals living today are descendants of various branches of these older lineages.

“We found that bleaching and light scattering are associated across the history of reef corals,” Westneat said. “This important mechanism occurs repeatedly in all major coral groups, regardless of relationship or evolutionary age.”

Corals have evolved to scatter light efficiently. Corals whose skeletons scatter light the most efficiently have an advantage under normal conditions. They also tend to grow faster as this leads to a skeletal structure that is more conducive to scattering.

However, when some of the algae are lost due to stress, the limestone skeletons amplify the light so much that remaining algae have to deal with even more light, thus being at an even greater risk of damage. This creates a vicious cycle forcing more and more algae to leave the coral. Less scattering-efficient corals, on the other hand, do not create the vicious cycle.

The paper is titled “Modulation of Light-Enhancement to Symbiotic Algae by Light-Scattering in Corals and Evolutionary Trends in Bleaching.” This PLOS ONE paper is available at http://dx.plos.org/10.1371/journal.pone.0061492.

Editor’s note: In 2011, another research paper published in PLOS ONE discovered coral skeletons serve as both internal reflectors and UV protection.  Coral physiology is truly amazing!

[via Northwestern University via Eureka Alert]