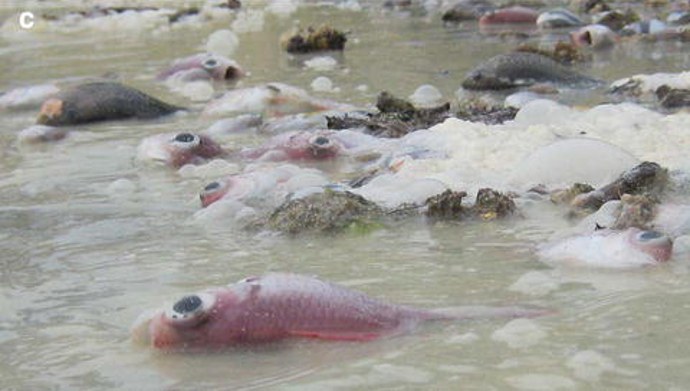 Coral spawn accumulation, decomposition, and subsequent fish kill on the eastern shoreline of the lagoon. Photos by Brendan O’Brien.


Published today in Coral Reefs, Jean-Paul Hobbs and Hisham Macrae report on just that in their paper “Unusual weather and trapped coral spawn lead to fish kill at a remote coral atoll.”

The event happened this past January at an eastern atoll in the Cocos Islands in the Indian Ocean.

The conditions were just right: low wind speeds with winds out of the west caused a stall of the lagoonal flushing that normally occurs at this time of year.  The western winds blew coral spawn slicks (picture (a) at right) into the lagoons where they stalled.  This resulted in a mass fish die-off over the next several days (pictures (b) and (c) at right) “due to hypoxia caused by a combination of oxygen consumed by coral spawn, oxygen depletion by decomposing coral spawn and other dead organisms, and lack of lagoon flushing.”

The mass mortality will have a significant impact on both the local people that rely on the lagoon for food and their livelihood and on fish and other animals that relied the reef for shelter and food.