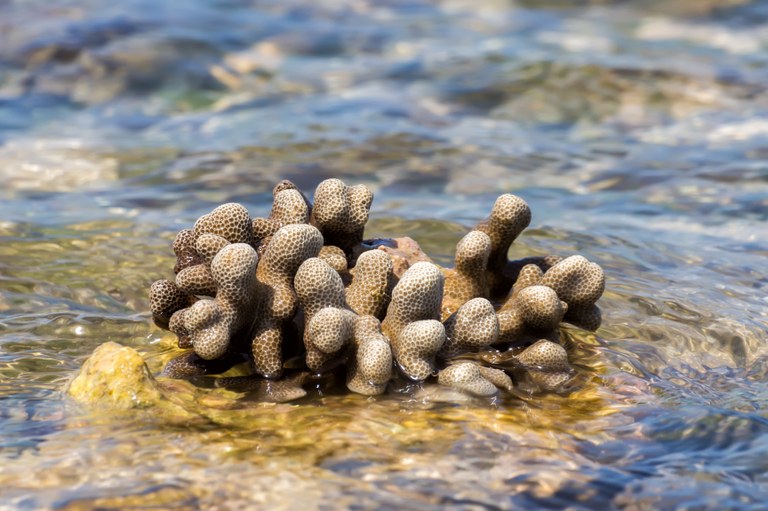 Scientists from the ARC Centre of Excellence for Coral Reef Studies (Coral CoE) have found a species of coral living in a dynamic reef system, which is able to protect itself from the impact of ocean acidification.

Ocean acidification, caused by rising CO2, is one of the greatest long-term challenges facing reefs. It reduces coral’s ability to form their skeletons and build reef structures.

Now Coral CoE researchers from the University of Western Australia and the University of Queensland have found that coral colonies of P.cylindrica within Heron Island lagoon on the Great Barrier Reef have a unique internal solution to the problem.

“Our research shows that some corals living in dynamic reef systems (P.cylindrica) have the ability to maintain a nearly constant pH within their calcifying fluid, regardless of the pH of the surrounding environment,” says lead author, Lucy Georgiou.

“This enables them to continue to form their calcium carbonate skeleton even under relatively low pH conditions.”

Co-author, Professor Malcolm McCulloch, says the findings indicate physiological controls on the pH of the coral’s calcifying fluid despite large declines in this highly dynamic environment.

“In contrast previous mesocosm experiments conducted under constant conditions of pH and temperature had indicated a partial dependence of the corals calcifying pH on the external seawater,”

The regulatory mechanism allows the coral to grow at a relatively constant rate, suggesting they may be more resilient in this environment to the effects of ocean acidification than previously thought.

The researchers were able to study the colony in its natural environment using the innovative Free Ocean Carbon Enrichment (FOCE) technique to simulate the impact of ocean acidification.

“It was really important to do this, as many reef systems are highly complex environments,” says Ms Georgiou.

While the findings are positive, it’s not yet known if the adaption is species specific and limited to colonies in dynamic reef systems.

“This is most likely only typical to corals from reefs such as Heron Island lagoon where temperature and pH fluctuations vary greatly on daily to seasonal basis” says Ms Georgiou.

“The next step in this research is to explore if P. cylindrica colonies from more stable environments also have the ability to adapt and if they too can ‘hold up’ to increased acidity,” she says.

“We also need to explore what impact rising sea temperature has on the corals ability to maintain its internal pH.”

Ove Hoegh-Guldberg, and Malcolm McCulloch is published in the journal, Proceedings of the National Academy of Sciences. http://www.pnas.org/content/early/2015/10/01/1505586112.full.pdf