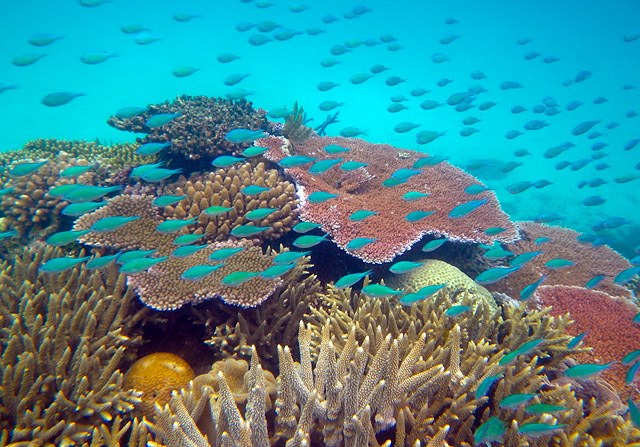 
Corals may be better placed to cope with the gradual acidification of the world’s oceans than previously thought – giving rise to hopes that coral reefs might escape climatic devastation.

In new research published in the journal Nature Climate Change, an international scientific team has identified a powerful internal mechanism that could enable some corals and their symbiotic algae to counter the adverse impact of a more acidic ocean.

As humans release ever-larger amounts of carbon dioxide into the atmosphere, besides warming the planet, the gas is also turning the world’s oceans more acidic – at rates thought to far exceed those seen during past major extinctions of life.  This has prompted strong scientific interest in finding out which species are most vulnerable, and which can handle the changed conditions.

In ground-breaking research, a team of scientists from Australia’s ARC Centre of Excellence for Coral Reef Studies, at the University of Western Australia and France’s Laboratoire des Sciences du Climat et de l’Environnement, has shown that some marine organisms that form calcium carbonate skeletons have an in-built mechanism to cope with ocean acidification – which others appear to lack.

“The good news is that most corals appear to have this internal ability to buffer rising acidity of seawater and still form good, solid skeletons,” says Professor Malcolm McCulloch of CoECRS and UWA.  “Marine organisms that form calcium carbonate skeletons generally produce it in one of two forms, known as aragonite and calcite.

“Our research broadly suggests that those with skeletons made of aragonite have the coping mechanism – while those that follow the calcite pathway generally do less well under more acidic conditions.”

The aragonite calcifiers – such as the well-known corals Porites and Acropora – have molecular ‘pumps’ that enable them to regulate their internal acid balance, which buffers them from the external changes in seawater pH.

“But the picture for coral reefs as a whole isn’t quite so straightforward, as the ‘glue’ that holds coral reefs together – coralline algae – appear to be vulnerable to rising acidity,”  Professor McCulloch explains.

Also of concern is that a large class of plankton, floating in the open oceans and forming a vital component of marine food webs, appears equally vulnerable to acidification.  If so, this could be serious not only for marine life that feeds on them – but also for humans, as it could impair the oceans’ ability to  soak up increased volumes of CO2 from the atmosphere.  This would cause global warming to accelerate.

Ironically, an added plus is that warming oceans may increase the rates of coral growth, especially in corals now living in cooler waters, he says.

However, the big unknown remaining is whether corals can adapt to global warming, which is now occurring at an unprecedented rate – at about two orders of magnitude faster than occurred with the ending of the last Ice Age.

“This is crucial since, if corals are bleached by the sudden arrival of hot ocean water and lose the symbiotic algae which are their main source of energy, they will still die,” he cautions.

“It’s a more complicated picture, but broadly it means that there are going to be winners and losers in the oceans as its chemistry is modified by human activities – this could have the effect of altering major ocean ecosystems on which both we and a large part of marine life depend.”

The researchers conclude “Although our results indicate that up-regulation of pH at the site of calcification provides corals with enhanced resilience to the effects of ocean acidification, the overall health of coral reef systems is still largely dependent on the compounding effects of increasing thermal stress from global warming and local environmental impacts, such as terrestrial runoff, pollution and overfishing.”