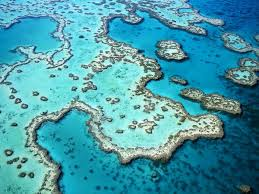 dimethylsulphoniopropionate (DMSP). This compound creates “the characteristic ‘smell of the ocean”. Since this tell tale smell  is actually derived from the DMSP compound, it indicates how abundant the molecule is in the marine environment. In fact we could smell it in a single baby coral,” says AIMS chemist Cherie Motti, and co-author on the paper published in the journal Nature.

Production of DMSP was found to increase when corals are subjected to water temperatures that put them under heat stress. DMSP and its breakdown products act as antioxidants (chemical defence compounds) protecting coral tissues from environmental stress.

The sulphur-based DMSP molecules also serve as nuclei for the formation of water droplets in the atmosphere – and hence help to create clouds. If coral numbers decline, the scientists warn, there could be a major decrease in the production of DMSP and this, in turn, will impede cloud formation.

Researchers believe that declining trends in coral cover and the associated decline in sulphur aerosol production from coral reefs may further destabilize local climate regulation and accelerate degradation of this globally important and diverse ecosystem. MORE