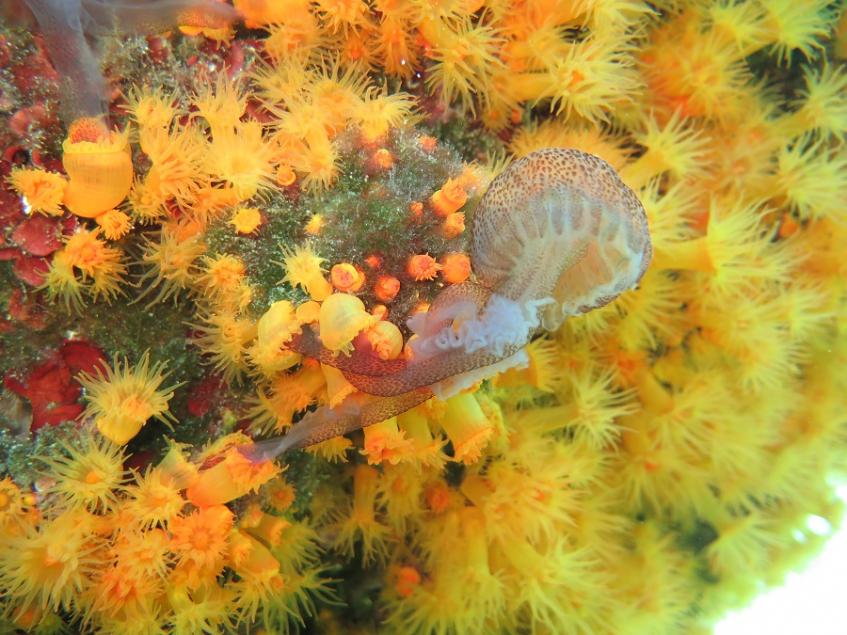 I came across this piece of research news in my news feed a few days back. It seems some species of coral actively team up to capture jellyfish prey.The coral Astroides calycularis, a bright orange species found in Mediterranean caves, was observed in caves off Sicily by researchers. The species feeds on zooplankton, but has never been seen consuming jellyfish.

“Although both species have been known for years, we had no idea that the coral could catch and eat these jellyfish,” said Fabio Badalementi, Research Director at the Italian National Research Council and Honorary Professor at the University of Edinburgh

The researchers noted that when jellyfish (in this case Pelagia noctiluca, a species capable of inflicting painful stings) were washed against the corals,  some corals snared them with their nematocysts.  The actions of the jelly, as it tried to pull away, meant it would then trigger the same response from nearby corals, thus more corals could potentially share in the meal and make it harder for the jelly to escape.

“This is a really fascinating observation. The conventional wisdom is that corals don’t eat jellyfish, but these results show that we need to keep both our eyes and minds open to new discoveries,” said Professor Murray Roberts from the School of GeoSciences.

Quotes and image supplied in press materials from the University of Edinburgh.