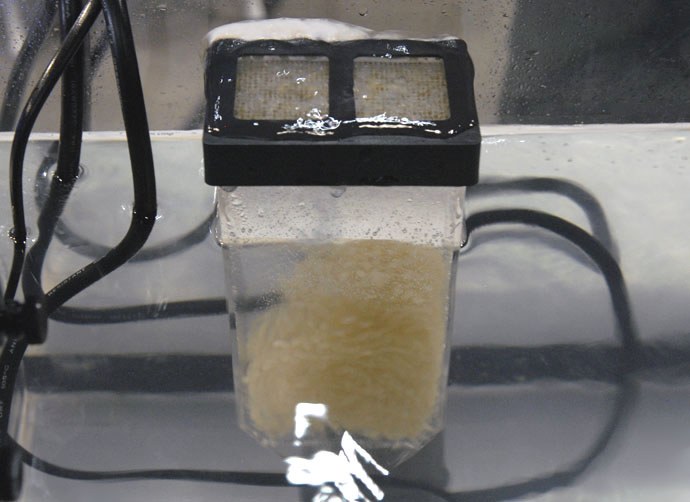 
The production nano reactor is similar to the prototype nano reactor.  A small flow-adjustable circulation pump located below the V-bottomed reaction chamber keeps the media tumbling, with water overflowing out the top of the reactor and back into the tank/sump.  The major change with the production model is its effluent design.  The prototype utilized two black strainers to insure the media stayed within the reactor, while the production model uses a semi-rigid plastic straining mesh held in place with a fitted plastic rim.  CPR plans to offer different mesh sizes to allow users to cater their reactor to specific media sizes.

CPR booth-goers could have easily missed spotting the production model CPR nano fluidized media reactor … and not just because of its small size.  The reactor was literally hidden behind the prototype models of the nano and mini reactors CPR has been teasing us with since summer.

Look for the CPR nano reactor to appear at any CPR authorized retailer by the end of 2011. CPR will also introduce the mini version (model on the right).  The prices for the nano and mini reactors are expected to have a MSRP of about $50 and $60, with a selling price that will probably be a little lower.

Here is CPR’s video of the prototype models in action.  Note the production nano reactor also functions in the same way as the left prototype model except for the aforementioned effluent redesign.