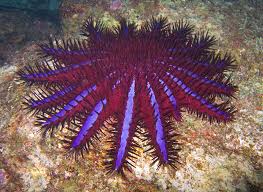 There has been a lot of coverage in the past year over the damage that Crown-Of-Thorns Starfish were causing coral reefs. CSIRO marine ecologist Mick Haywood has discovered that reefs previously noted to be damaged by bleaching and the starfish earlier this year are now nearly completely wiped out. This little known reefs were already hit hard by the effects of bleaching and the health of the reefs were at critical levels when scientists began surveying what was left and noticed the impact of the starfish last year. “In two of the sites where we found high densities of crown-of-thorns and a little bit of coral left late last year, that was south-east of Barrow [Island], there was no coral there at those sites and no crown-of-thorns,” Mr. Haywood said. “So potentially their food is disappearing and they’re dying.” This is happening on other coral reefs in Australia as well. “Other corals are still remaining, and these are the less preferred feeding targets for crown-of-thorns,” Mr. Haywood said. “But they’re basically eating these other corals which they would normally leave alone.” The areas had vast crown-of-thorns starfish colonies with more than 180 starfish per hectare. For comparison, anything more than 15 starfish per hectare is considered an outbreak. Haywood notes the importance of reducing the human impact in these devastated areas and focusing efforts on restoration, which may be easier to do because of the smaller number of corals making it more manageable. “Because there’s so little coral left they might be easier to manage than they have been on the Great Barrier Reef in the past,” Mr Haywood said. MORE