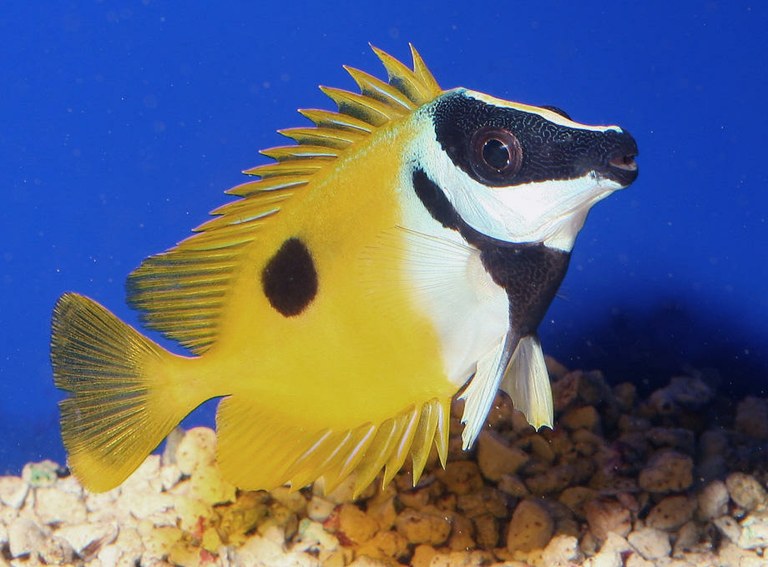 
News release by the USGS:

A tropical fish that calls the West Pacific Ocean home has been documented outside of its native range for the first time, making it Florida’s newest non-native marine fish species.

A citizen scientist spotted a popular aquarium fish, the blotched foxface, a species of rabbitfish, while scuba diving offshore of Dania Beach, Florida, last week. Within 24 hours of receiving the sighting report, a coordinated effort by Reef Environmental Education Foundation and the U.S. Geological Survey led to the live-capture of the fish.

This is the first record of the species outside of the western Pacific Ocean, and it’s unknown how the fish could impact its non-native environment.

“Any organism outside its normal range has the potential to cause negative impacts,” said Lad Akins, Director of Special Projects for REEF. “If we wait to see what those impacts are going to be, it’s too late – they’ve already happened.”

The rabbitfish is the 36th non-native marine fish species documented off of the state’s coast. Scientists acknowledge the importance of early detection and rapid response in part because of lessons learned from the lionfish, a destructive marine invader, which was first reported off South Florida in 1985. It soon invaded the Atlantic coast of the United States, the Caribbean Sea, and the Gulf of Mexico, with unprecedented, alarming speed.

“The lionfish has definitely changed the way we think about marine fish invasions,” said Pam Schofield, USGS Fish Biologist. “Lionfish spread incredibly fast and now it occupies an enormous invaded range where it negatively impacts native marine life. We know that we need to be vigilant when it comes to future introductions.”

Like the lionfish, the rabbitfish is a venomous fish with a voracious appetite. But, while the lionfish preys on marine life, the rabbitfish prefers marine vegetation like seaweeds, algae, and seagrasses. Scientists say both fishes were likely introduced to Florida waters through aquarium releases.

Since only one rabbitfish has been found, scientists can’t say for certain if it has established a population in Florida; because of this, they consider it a non-native species, rather than an invasive species. Still, non-native sightings are a cause for concern.

“Non-native fish compete with and prey on native marine life and can spread diseases,” said Schofield. “Some can even be harmful to humans.”

USGS and REEF have coordinated the removal of the rabbitfish and three other non-native marine fish species from Florida waters. All four species were captured alive, and three of the four are currently on display at educational institutions.

Florida’s newest non-native marine fish, the blotched foxface rabbitfish, will be on display at the Patricia and Phillip Frost Museum of Science in Miami, Florida, when it opens its doors in early 2017.

If you spot this fish or any other non-native or invasive aquatic species, please report the sighting to the USGS’ Nonindigenous Aquatic Species database or to REEF’s exotic species sighting program.