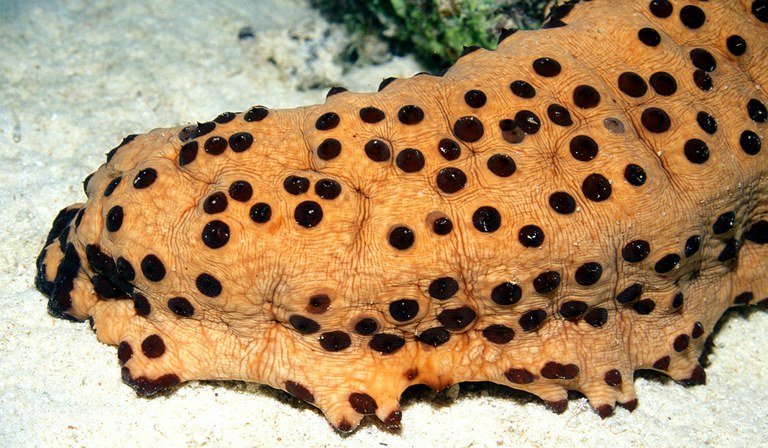 Washington, D.C. — Coral reefs are extremely diverse ecosystems that support enormous biodiversity. But they are at risk. Carbon dioxide emissions are acidifying the ocean, threatening reefs and other marine organisms. New research led by Carnegie’s Kenneth Schneider analyzed the role of sea cucumbers in portions of the Great Barrier Reef and determined that their dietary process of dissolving calcium carbonate (CaCO3) from the surrounding reef accounts for about half of at the total nighttime dissolution for the reef. The work is published December 23 by the Journal of Geophysical Research.

Reefs are formed through the biological deposition of calcium carbonate (CaCO3). Many of the marine organisms living on and around a reef contribute to either its destruction or construction. Therefore it is crucial that the amount of calcium carbonate remain in balance. When this delicate balance is disrupted, the reef ceases to grow and its foundations can be weakened.

In order to fully understand a reef’s ability to deposit carbonate and grow, it is necessary to understand the roles that the various elements of sea life play in this process. This is especially important because increased atmospheric carbon dioxide is predicted to decrease the amount of carbonate available due to acidification.

The research group set out to examine the role that sea cucumbers play in the reef environment.

Schneider’s team included Carnegie’s Ken Caldeira, as well as Jacob Silverman, of the Israeli Limnology & Oceanography Institute; Maria Byrne and Erika Woolsey, both of the University of Sydney and the latter also from James Cook University; and Hampus Eriksson of Stockholm University.

They studied the growth and dissolution of One Tree Reef, which surrounds One Tree Island in Australia’s Great Barrier Reef. Focusing on an area of the reef known as “DK13”, they found that sea cucumbers were abundant. They collected some of these sea cucumbers and placed them in aquaria to study the effect on sea water resulting from the sand and rubble transported through their gut system as part of their digestive process.

As part of another ongoing study in this area, the team found that the coral reef was dissolving at night. They found that sea cucumbers play a crucial part in this process. They live off the bits of organic matter in the carbonate sand and rubble that they ingest; in this process, their digestive systems produce acids that dissolve parts of these carbonate minerals. The dissolved carbonate minerals are then released into the surrounding environment. The researchers found that these lowly organisms might be responsible for half of the CaCO3 of the reef observed at night.

The burning of coal, oil, and gas releases CO2 into the atmosphere, which is later absorbed by the ocean, causing the ocean to acidify. Ocean acidification is expected to slow reef growth. With slower reef growth, the dissolution of CaCO3 within the guts of sea cucumbers is expected to become even more important to the reef CaCO3 budget.

“Even though the sea cucumbers dissolve CaCO3 on the reef, in a lagoon such as the one at One Tree Reef, where there is limited seawater exchange with the surrounding ocean, they can be important in recycling of nutrients to support primary productivity. They also increase sea water buffer capacity to partially offset ocean acidification effects, helping to maintain the overall health of the coral reef,” Schneider said. “Although sea cucumbers may play a part in reef dissolution, they are also an important part of an incredible marine environment.”

This research was supported by the Moore foundation. The authors thank the University of Sydney’s One Tree Island Research Station facility.

The Department of Global Ecology was established in 2002 to help build the scientific foundations for a sustainable future. The department is located on the campus of Stanford University, but is an independent research organization funded by the Carnegie Institution. Its scientists conduct basic research on a wide range of large-scale environmental issues, including climate change, ocean acidification, biological invasions, and changes in biodiversity.

The Carnegie Institution for Science (carnegiescience.edu) is a private, nonprofit organization headquartered in Washington, D.C., with six research departments throughout the U.S. Since its founding in 1902, the Carnegie Institution has been a pioneering force in basic scientific research. Carnegie scientists are leaders in plant biology, developmental biology, astronomy, materials science, global ecology, and Earth and planetary science.