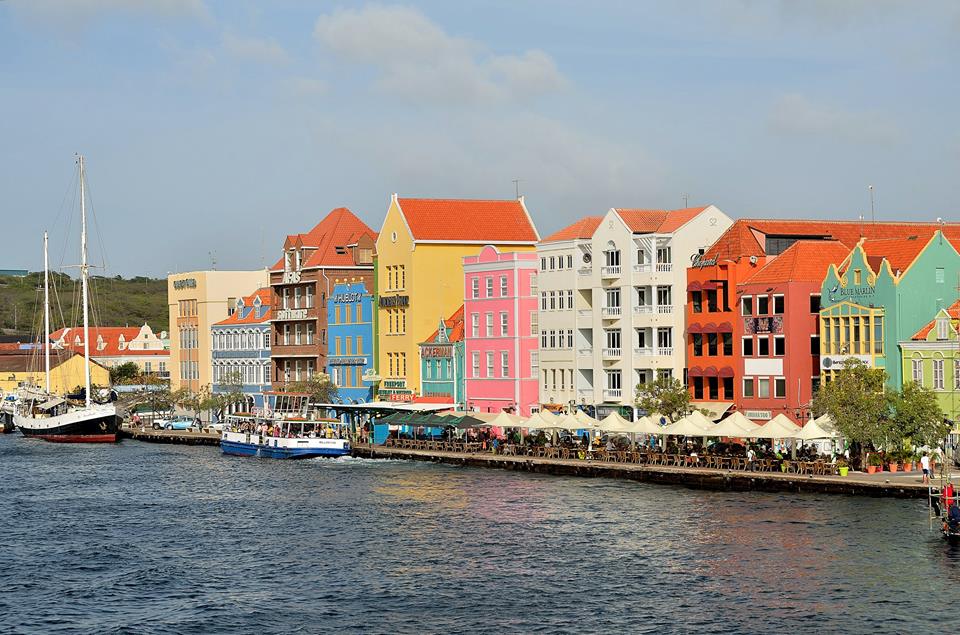 The whimsical colors of Curaçao.

Today was incredible. It has been over twelve hours since I arrived on Curaçao. Strange. It felt like days ago when Vanessa and I were eating gummy bears in Miami, waiting for our plane to arrive. Time crawls to a halt, but not in an unsavory manner. Curaçao is sleepy, yet brazenly exuberant. A somewhat peculiar juxtaposition. The atmosphere is whimsical, captivating you in a cornucopia of color and sounds. The air is thick with the cacophony of crashing waves and Caribbean style music in the distance. As I watch the yolk colored sun bleed orange into the horizon, I’ve decided to pen my thoughts down in this log.

I guess it’s only logical that we start from the beginning. Dare I say Texas? Not that far back – but with so much beef and shenanigans, can you blame me? Anyway, I met up with Vanessa early that day at Miami international airport. Vanessa’s the “Coral Manager” at ORA, and although we’ve met on multiple occasions before, this is the first time we’ve travelled together. Her golden hair and seafoam jacket was immediately recognizable, as was my scampering in flip-flops. It’s embarrassing, to say the least, that while I’m usually quite travel savvy, I failed on all levels to exude the image I was hoping to portray. 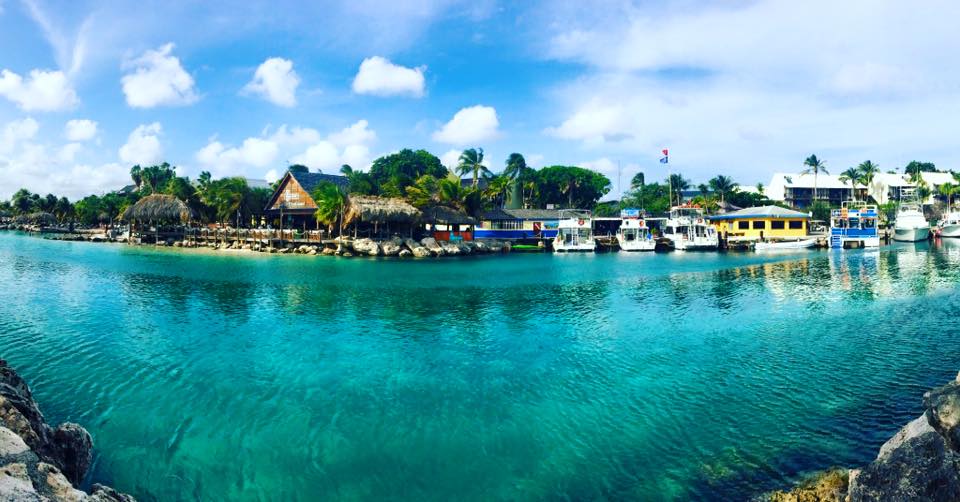 The view from outside our resort.

The flight was a short three hours. But for the antsy, there was complimentary in-flight wifi – although I must admit I was visibly affected when the vessel left the signal boundaries of the continental U.S. At Curaçao, Dutch was waiting to pick us up, but the slow and rather crowded airport made clearing customs a dreary ordeal. Dutch is a true visionary, the man behind the famed Curasub and the Royal Sea Aquarium Resort – amongst other brilliant things.

Fanning through the airport crowd, his stoic posture and hair of silver made him easy to pick out. His uncanny resemblance to Jonathan Goldsmith, a.k.a “The Most Interesting Man in the World” was remarkable. I received a firm handshake and an intense gaze, one lasting not more than a second, but enough to know that this man had been to places, and seen things I cannot even remotely comprehend. We exchanged pleasantries, and his stoic façade was quickly dispelled when we engaged in piscine-fuelled repartee. 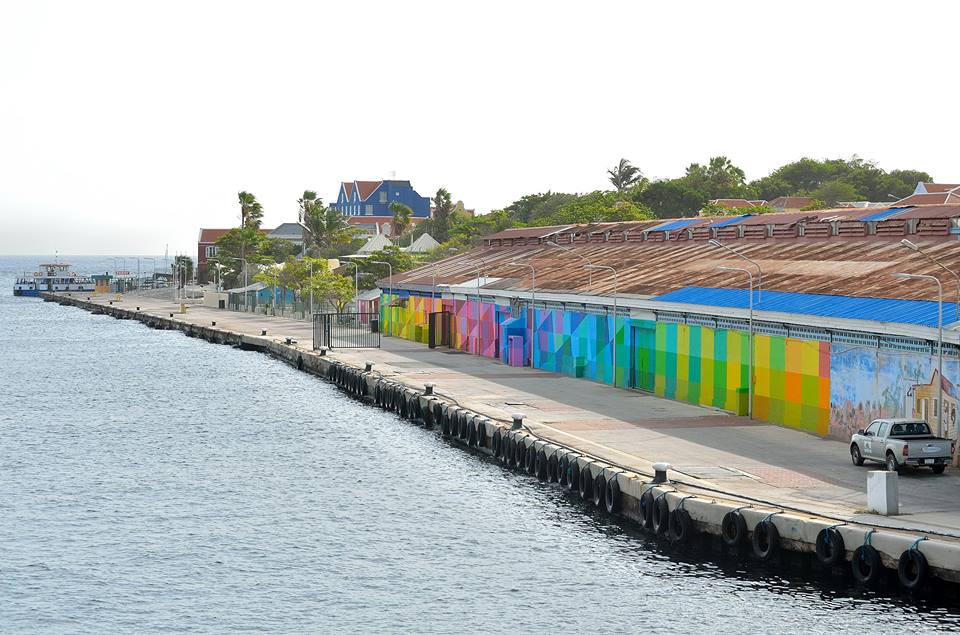 We took a longer detour to the resort. Dutch wanted to show us the local sights of Curaçao. I remember everything being gaudily colored. Buildings, homes, sidewalks and street stalls. Though some of the architecture looked dilapidated and ancient, it provided a refreshing dichotomy. The whimsy was a catalyst to my already raring excitement. The curasub is one of those iconic things that every fish geek has on their bucket list. And I was to sit in it. Think of it as a pilgrimage that must be undertaken. The feeling was palpable, and comparable to that when I visited the Bishop Museum in Hawaii, after having tea with the incomparable Jack Randall. 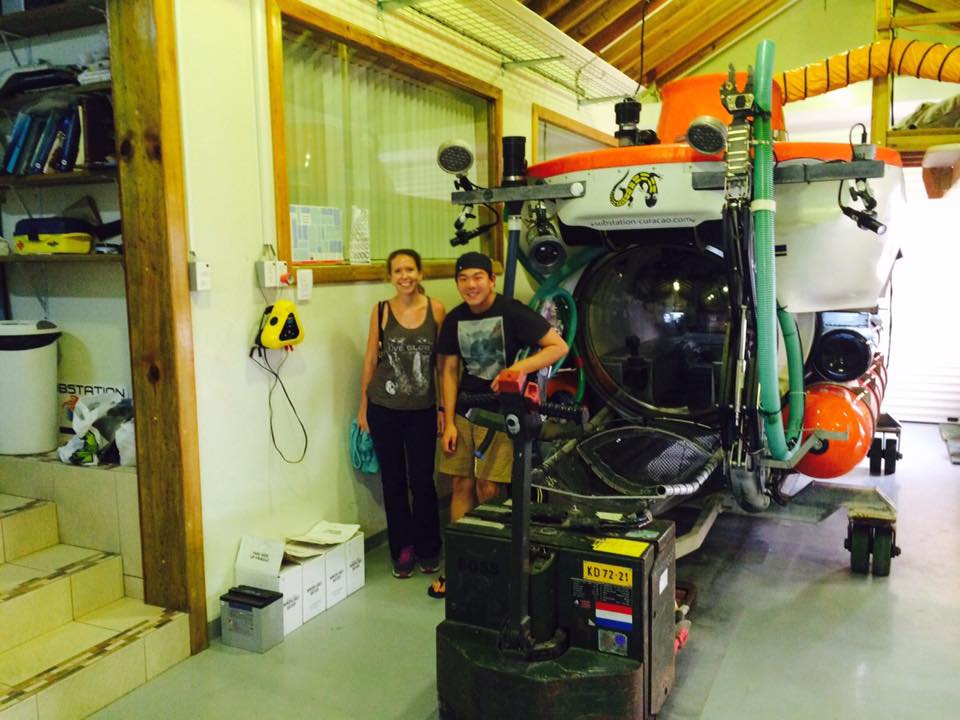 Our first encounter with the curasub.

So here we are. Vanessa and I stood in front of this five tonne underwater robot. A convex bubble for a window, guarded on each side by a mechanical arm. One acting as a dispenser (of water or quinaldine), the other as a retriever. Release and retrieve, as they say. Dutch gave us a quick run down of the curasub; how it functions, how it operates, how it keeps us alive and how it will continue to keep us alive even in failure. It became increasingly less machine-like, and more anthropomorphic. Except for its steel housing and mechanical arms. That’s all machine. Of course, it would seem rather silly if the Curasub didn’t assume the thematic exuberance that the rest of this island follows. And it didn’t disappoint. Orange it was. Orange and loud.

But we were to wait another day before we could take it for a spin. Dutch had other plans for us. Exciting stuff. He had some deepwater fish hanging out in collection jars at 130ft, decompressing. I guess it makes sense to bring these up slowly over a week, instead of bleeding their swim bladders with a needle. After all he had the whole Caribbean to himself literally just outside the substation office, so it really isn’t much trouble going down for them. Today they were bringing the fish up to 80ft, and Vanessa and I were invited to see how it was done.

Enter Joe Oliver and Manuel Jove. Two strapping young gentlemen in charge of caring for the fish at the Curaçao Sea Aquarium. I’ve heard of Joe before, and have read some of his articles on deepwater fish. It was great to put a face to that name. By now my skin was olive, baked from the searing heat. I didn’t want to don a wetsuit, so Vanessa and I just geared up and went in the water with our clothes on. She had on her bathing suit. I was a little bit more conservative with my BlueHarbor polo-T shirt. Gotta represent the fish game.

I’ve never dove the Caribbean before. I come from the Pacific. Things are different there. This alien landscape rife with gorgonians. Where were all the Acropora i’m so used to seeing? Unfamiliar, but fascinating no less. As I descended past 30ft, the monotonous brown became vastly studded with purple. Like gemstones, I realized these were Gramma loreto. The humble Royal Gramma, a fish so ubiquitous in the aquarium trade. Such a species would never elicit a response from me at a wholesaler, but here, I was captivated. It is here in the Atlantic that Serranidae attains its maximum diversity, and diverse were the serranids in this reef. 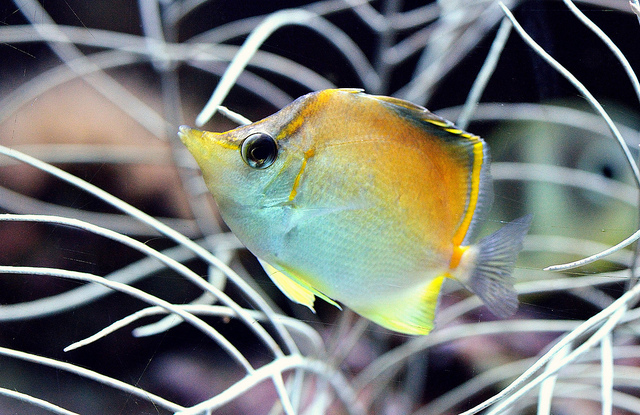 I was in one instance swimming along a ledge, at 75 ft, when I saw a butterflyfish swimming upside down. It was handsome, but shy, and quite new to me. I got close to it before it made a getaway. Thinking it might return to the same spot, I swam a loop and came back, only to observe it had reemerged from another hole. It was Prognathodes aculeatus. A species I was familiar with, but had never seen in the field. With my mouth concealed behind a regulator, I called out, in futility, to Vanessa, who had an underwater camera. She didn’t hear me, and the butterflyfish got away. 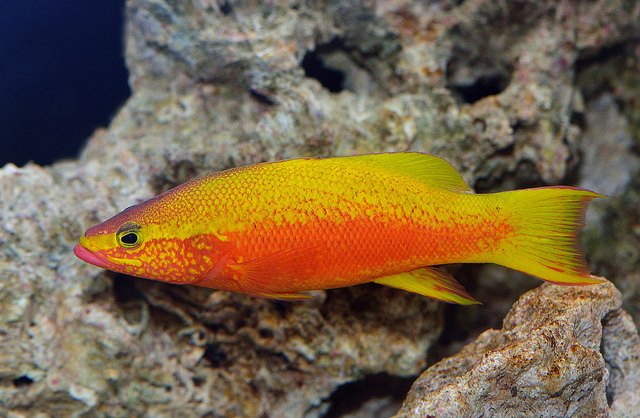 Liopropoma aberrans. A captive specimen in a private collection in Nara, Japan. 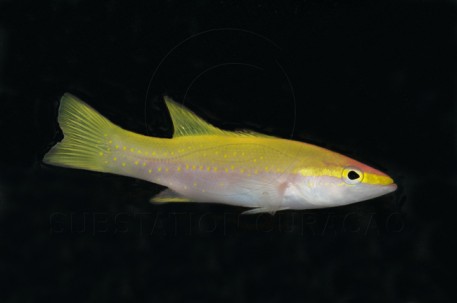 By now, Manuel had ascended from 130ft with his stash of deepwater fish. He tied them on a towline at 80ft, and signaled the two of us to take a look. In a net mesh full of collection cups, two species were immediately recognizable. Like Sol and Luna, they were sisters. Similar, but separable by subtle nuances. One of them flaming red inscribed with tresses of gold. The other was yellow, slated in sterling silver. They were Liopropoma aberrans and L. olneyi – two very deepwater basses, both commanding exorbitant prices in the trade. Here they were, in front of me. While I have seen both species in captivity before during my travels, seeing them here evoked a different feeling. It’s always nice to know where these fish come from, and how they are handled every step along the way. This decompression exercise was a unique experience. Of course, and I don’t want to sound cliché, but we didn’t get any photos. Vanessa’s camera didn’t work past 80ft. 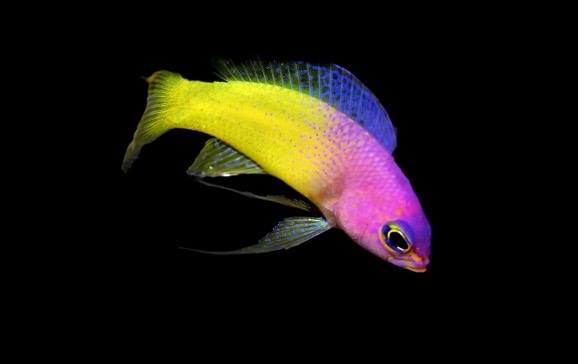 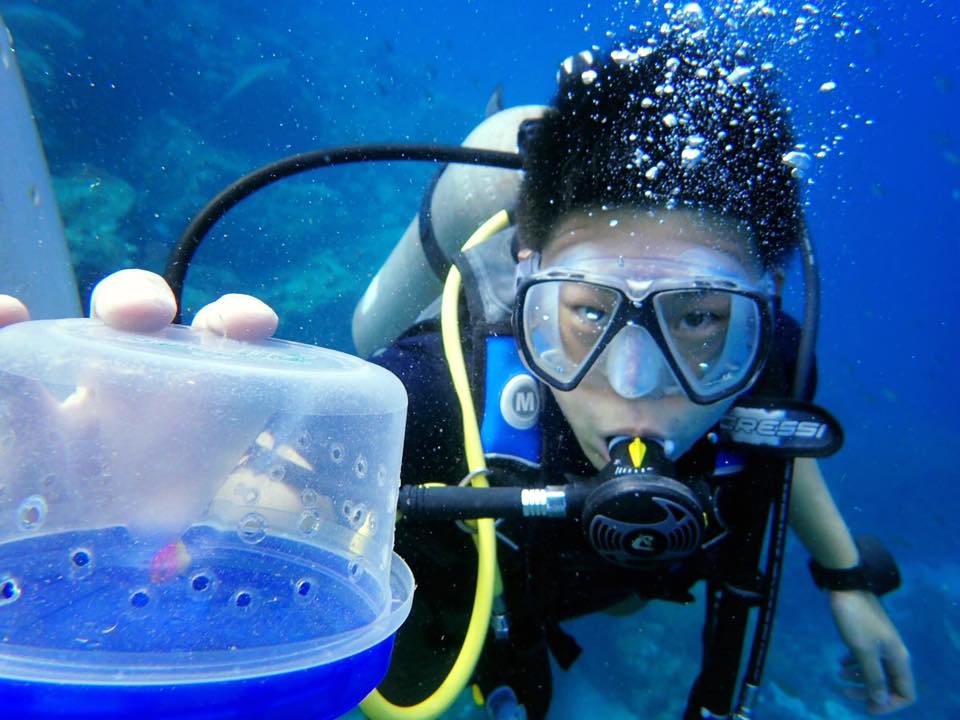 A gratuitous selfie with L. klayi in the collection cup.

So we headed up to 60ft, where another mesh bag of deepwater fish was attached to the towline. This bag had a different set of fish. I reached in and pulled out a cup. Inside was a fish of orchid and goldenrod. Quite like the Royal Gramma, but different. More delicate, almost fairy like, and with a subtle sparkle. It was Lipogramma klayi. I’ve spent a great deal of my time as a writer focusing on portraying stories accurately describing the appearance, biology, behavior and science behind a species. But it’s difficult to put feelings into words. Today was magical. Vanessa’s camera worked at this depth, and we got a photo. Gratuitous photo of me with it, of course. Couldn’t help it. 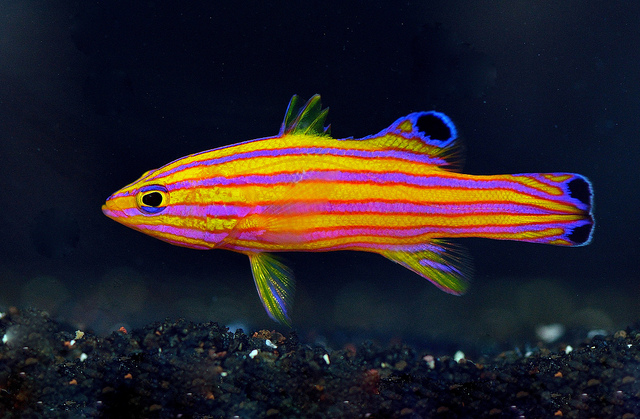 After all that was done, we headed up, washed up and of course, Dutch was there to greet us. It’s hardly a surprise, but after all that, we still hadn’t checked into our room. So we did, and we rested, and I texted, for hours, telling my friends back home about what I saw and what I felt.

Dinner is upon us soon. Dutch and Laura are picking us up, so I better get changed. Today was great, but tomorrow we’ll take the submersible for the first time, and I cannot wait. Wonder what we’ll see. Anyway, I think I’m going to put on my Prognathodes T-shirt for dinner. It’s a great shirt. Great events call for great shirts.

That’s all for Day 1. Tomorrow should be amazing.