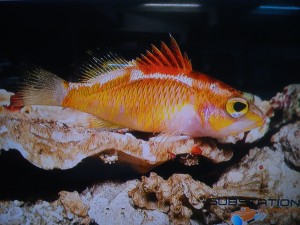 I have great admiration for the work that the Curacao Sea Aquarium is doing with deep water fish. A fact highlighted on an early episode of Fish Tank Kings where the team uses the Curasub to collect a number of deep water fish for a project at the Florida Aquarium.

In more recent news, Joe Oliver, a resident marine biologist at the Curacao Sea Aquarium, describes a magnificent temporary addition to the aquarium: the Plectranthias. This beautiful  fish was recently collected from depths of over 650 ft on the island of Klein, about ten miles from the main island of Curacao. The fish was collected by the Curasub, which was able to collect the fish with minimal stress. The Curasub, is a special submarine of the Curacao Aquarium that is designed to descend up to 1000 feet.The process used to get the fish to the surface is crucial to ensuring its health and the team took special care to ensure optimum health.

The divers placed the fish in special individual cups which are tied down to the line in order to allow seawater to pass through as the fishes decompresses on the way to the surface. The process to make it to the surface took 36 hours, and the fish did not require any venting before acclimating to the surface. The coloration on this fish is really spectacular, featuring red, white and yellow, which you would not imagine to be found in a deep water fish. The fish will be on display in the deep water exhibits at the Curacao Sea Aquarium and for all you rare fish finatics it is a must see.MORE