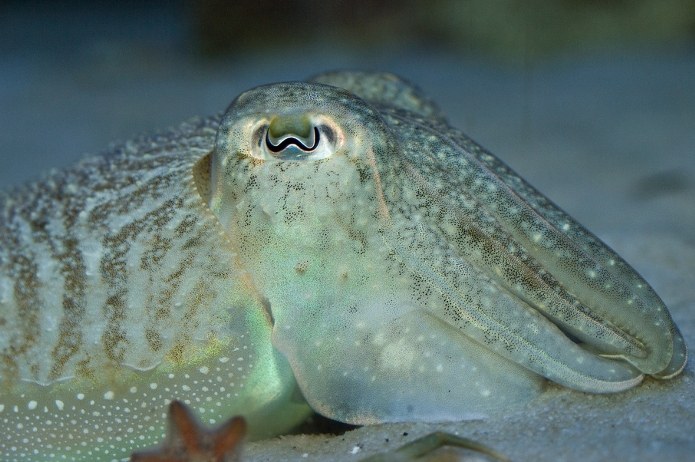 Cuttlefish in the aquarium at London Zoo. Check out those eyes! Photo by William Warby / Flickr.


Research published this week in Current Biology by researchers Temple, Pignatelli, and others has shown that cuttlefish have highly acute vision when it comes to visualizing polarized light in their environment. Up until recently, it was believed that cuttlefish could only visualize down to about 10-20 degrees of difference in polarization. However this new research has shown that they are sensitive all the way down to approximately 1 degree of polarization. This new minimum was deduced through showing cuttlefish movies through a specially modified LCD computer screen.

According to the Science Daily article:

“Not only is this the most acute [light polarization] discrimination measured behaviourally in any animal, but it provides a high enough resolution to be relevant to real world visual tasks.” states Dr. Temple.

“For animals that can see it, the polarisation of light adds another dimension to vision, analogous to adding color to a black and white image” mentioned Dr. Temple. “Whilst some animals use the orientation of the electric field vector [light polarization] for navigation and orientation, the ability to discriminate angular differences in [polarization] has been implicated in object recognition for predator / prey detection as well as signalling and communication.”

To conclude their research paper, Dr. Temple’s group modeled what underwater scenes might look like with this polarization component added to it in the way of additional colors so that they could visualize it. What they found was that polarization added significant information to the visual display leading them to believe that there is much more information in the polarization dimension than thought before.

Thanks to Dave Moulton for bringing this article to our attention!