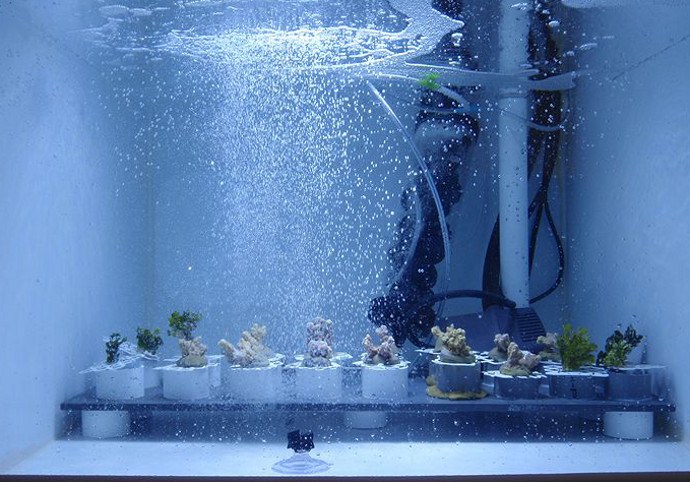 
Published this week in the journal Proceedings of the Royal B, researchers are finding out more about how corals calcify both during the day and during the night and what alkalinity components are preferred.

In their paper titled “Coral reef calcifiers buffer their response to ocean acidification using both bicarbonate and carbonate,” researchers Comeau, Carpenter and Edmunds measured how a certain coral adds calcium carbonate to its skeleton both during the day and during the night.  Most models assume that corals utilize strictly the carbonate anion when building its skeleton. However, alkalinity has another major component to it: the bicarbonate ion.  Could certain corals predominantly use the bicarbonate anion instead or at least be able to switch between the two? That was what their research was intended to find out.

What Comeau and other did was take specimens of a coral, Porites rus, and the alga Hydrolithon onkodes collected from French Polynesia, and subject them to various conditions in a closed aquarium system. They varied the dissolved carbon dioxide levels and made the water either more acidic or basic and monitored how the coral and alga utilized both carbonate and bicarbonate alkalinity to build its structure.

“Our results show that the negative effect of declining carbonate on the calcification of corals and algae can be partly mitigated by the use of bicarbonate for calcification and perhaps photosynthesis.”

The results of their research may explain why certain corals have shown resistance to ocean acidification. More research, however, is needed to better understand how other corals utilize carbonate and bicarbonate alkalinity throughout the day and whether or not temperature plays a role in carbonate vs. bicarbonate usage.