Some Damn Funny Videos Come With Some Brutally Sobering Realities

These little clips are likely to elicit a mélange of feels – a giggle, some tears, fits of rage, guilt and shame. #ReefReels is a short film competition presented by GetUp! Australia – one of Australia’s largest campaigning communities, boasting a following of over 600,000 members. Hitting multiple targets with their campaigns, many are dedicated to conservation and rehabilitation of The Great Barrier Reef, a treasure with a fate that’s wildly unknown but certainly bleak if proper attention isn’t paid.

In an effort to raise awareness for protection of The Reef, GetUp! teamed up with Tropfest, the world’s biggest short film festival, and called on filmmakers to help inspire us bipedal, land-dwelling creatures to strive for necessary change. Over fifty films emerged from the sea of human creativity, and while I obviously can’t post them all here, I figured I’d share some noteworthy contenders. 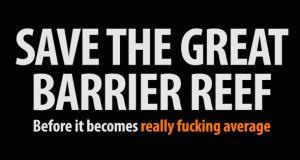 While many of the videos are humorous, they all carry an ominous message. A tragically desperate fish trying to find her life partner, former residents of The Reef forced into alcoholism and intensive therapy after the loss of their home, a “reefugee” program for homeless, displaced corals.

Check out some of the entrees below, and head over here to view the rest of the films. Like and share to cast your vote, sign the petition and consider making a donation. While it’s perfectly ok to laugh at these, keep in mind that in reality, this really isn’t very funny at all.