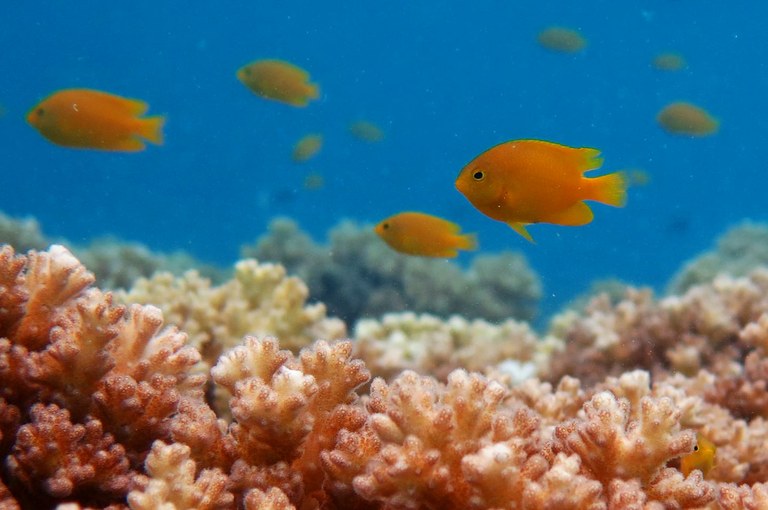 
Strangely enough, the study does not identify the “alarm cue” chemical, but we suspect it may be chondroitin.  In 2012, scientists finally isolated this chemical responsible for the “scary” scent fishes release when they’re injured.  If the chemical is indeed chondroitin, then it would appear the chemical serves dual purposes; it warns conspecifics to flee from impending danger while attracting predators to the area to give the captured prey a higher chance to escape.

Nature, if nothing else, is efficient.

Researchers at the ARC Centre of Excellence for Coral Reef Studies (Coral CoE) at James Cook University have found that fish release a chemical ‘distress call’ when caught by predators, dramatically boosting their chances of survival.

Fish harbour a chemical substance in their skin that’s released upon injury. It triggers fearful and escape behaviour in nearby fish, but until now scientists hadn’t identified the benefits to the sender.

“For decades scientists have debated the evolutionary origin of chemical alarm cues in fish,” says study lead author, Dr. Oona Lönnstedt, now a research fellow at the University of Uppsala.

The researchers have now found the answer, discovering that the chemical cue attracts additional predators to the capture site.

“Chemical alarm cues in fish seem to function in a similar way to the distress calls emitted by many birds and mammals following capture,” says study co-author Professor Mark McCormick from the Coral CoE.

“When damselfish release their chemical alarm on a coral reef, lots of additional predators are attracted to the cue release area,” says Professor McCormick.

“More predators would seem to mean more trouble, but we discovered that additional predators interfere with the initial predation event, allowing the prey a greater chance to escape.”

The research team found the new predators would attempt to steal the prey, and in the ensuing commotion the captured damselfish had a greater chance to break free and hide.

“When caught by a predator, small damselfish have almost no chance of escaping their fate as the predator’s next meal. However, when another fish predator is attracted to the capture site, prey will escape about 40 percent of the time,” says Professor McCormick.

Dr Lönnstedt says this proves that chemical alarm cues benefit the sender by giving it a much greater chance of not ending up as dinner.

“These findings are the first to demonstrate an evolutionary mechanism by which fish may benefit from the production and release of chemical alarm cues, and highlight the complex and important role chemical cues play in predator-prey interactions on coral reefs.” Dr. Lönnstedt says.

“It all goes to show that coral reef fish have evolved quite a range of clever strategies for survival which are deployed when a threatening situation demands.”

Damsel in distress: captured damselfish prey emit chemical cues that attract secondary predators and improve escape chances by Oona Lönnstedt and Mark McCormick is published in the journal Proceedings of the Royal Society B.