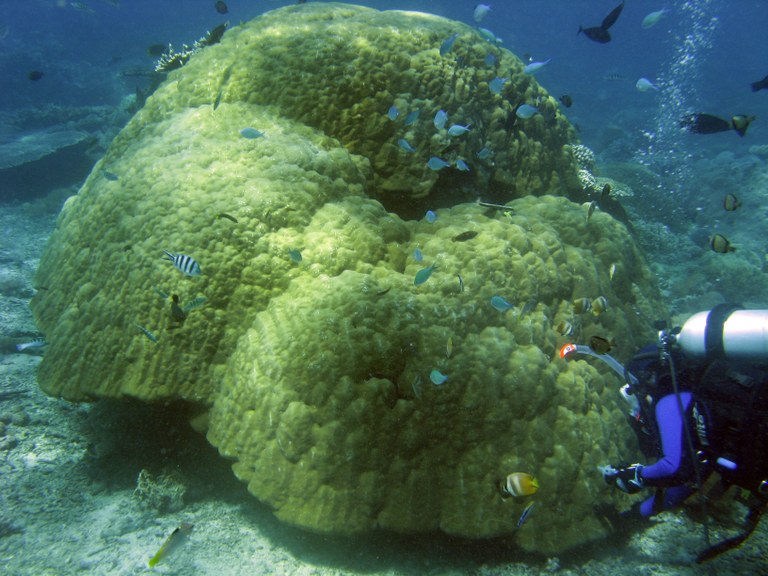 
Darwin hypothesized in 1880 that most species could not disperse across the marine barrier, and Baums’s study is the first comprehensive test of that hypothesis using coral. The results of the scientific paper, which will be published in the journal Molecular Ecology, has important implications for climate-change research, species-preservation efforts, and the economic stability of the eastern Pacific region, including the Galapagos, Costa Rica, Panama, and Ecuador.

The Eastern Pacific Barrier (EPB) — an uninterrupted 4,000-mile stretch of water with depths of up to 7 miles — separates the central from the eastern Pacific Ocean. In his writings, Darwin had termed this barrier “impassable” and, since Darwin’s time, scientists have confirmed that many species of marine animals cannot cross this oceanic divide. However, until now, researchers had not performed a comprehensive analysis of the impact of the barrier on coral species. “The adult colonies reproduce by making small coral larvae that stay in the water column for some time, where currents can take them to far-away places,” Baums said. “But the EPB is a formidable barrier because the time it would take to cross it probably exceeds the life span of a larva.”

To test whether or not coral larvae are able to travel across the barrier, Baums and her team chose a particularly hearty species called Porites lobata. “Compared with other coral species, Porites lobata larvae seem able to survive for longer periods of time; for example, the weeks that are required to travel across the marine barrier,” Baums said. “This species also harbors symbionts in its larvae that can provide food during the long journey. In addition, the adults seem able to brave more extreme temperatures, as well as more acidic conditions. So, if any coral species is going to make it across, it is this one.”

Baums and her team hypothesized that coral larvae originating in the central Pacific might be pushed along the North Equatorial Counter Current, which flows from west to east and becomes stronger and warmer in years with an El Niño Southern Oscillation event — a climate pattern that occurs about every five years. “Coral larvae are not very mobile,” Baums said. “So the only way coral larvae originating to the west of the barrier could travel to the east is along an ocean current, and warming of a current like the North Equatorial Counter Current would help larvae survive. If coral have traveled along this current in the past, we should find populations that are genetically similar living from the Galapagos to Costa Rica, Panama, and Ecuador.”

The team members collected coral samples of the Porites lobata species from both sides of the Eastern Pacific Barrier and performed genetic tests using special markers called microsatellites — repeating sequences of DNA that are informative for the purpose of distinguishing among individuals. “We found that Darwin was right: the EPB is a very effective barrier,” Baums said. “For the most part, samples we found to the east are genetically dissimilar to those we found to the west. This means that coral larvae originating in the central Pacific simply are not making it across the ocean to the Americas.”

The only exception, the team found, was a relatively small population of Porites lobata living near Clipperton Island, which is located just north and west of the Galapagos. The samples collected there were genetically similar to samples found throughout the central Pacific, indicating that the species had migrated there from the west relatively recently. “Interestingly, the coral that are lucky enough to cross the EPB to Clipperton Island stay there and don’t go any farther,” Baums explained. “In other words, we find that Porites lobata are not migrating south and east to the Galapagos after making it to Clipperton. We believe this is because these coral are adapted to the warmer conditions that their parents enjoyed to the west of the EPB; for example, near the Line Islands, Fiji, and Samoa. “Coral reefs thrive in shallow water in areas where the annual mean temperature is about 64 degrees Fahrenheit,” Baums said. “The eastern Pacific tends to be much cooler; in part, because of a process called upwelling — a phenomenon that occurs when winds stir up cold, deep ocean water, pulling it to the surface. Clipperton Island may provide a similar-enough environment to the Central Pacific, but the Galapagos area simply may be too cool.”

The team’s findings about the ability of coral to travel across the marine barrier have important implications for the economic stability of the eastern Pacific, the region’s species-conservation efforts and, more broadly, for the impact of climate change on tropical ecosystems. The Galapagos, Costa Rica, Panama, and Ecuador all rely heavily on tourism. Tourism, in turn, relies on healthy reefs that divers can visit and the sale of shellfish and lobster — species that are maintained, in large part, by the presence of coral communities.

“The take-home message is that coral populations in the eastern Pacific need to be protected,” Baums said. “That is, in the event of any large-scale coral crisis, we cannot count on coral populations in the eastern Pacific being replenished by larvae from the west.” Baums explained that, especially as the Earth’s surface continues to warm, such a crisis to coral reefs is not unlikely. During the El Niño Southern Oscillation events that occurred from 1982 to 1983 and from 1997 to 1998, some of the reefs experienced a 90-percent loss. Although they ultimately were able to bounce back, a stronger El Niño event might spell extinction for some coral species.

In addition to Baums, other researchers who contributed to the study include Jennifer Boulay and Nicholas R. Polato at Penn State and Michael E. Hellberg at the Louisiana State University.