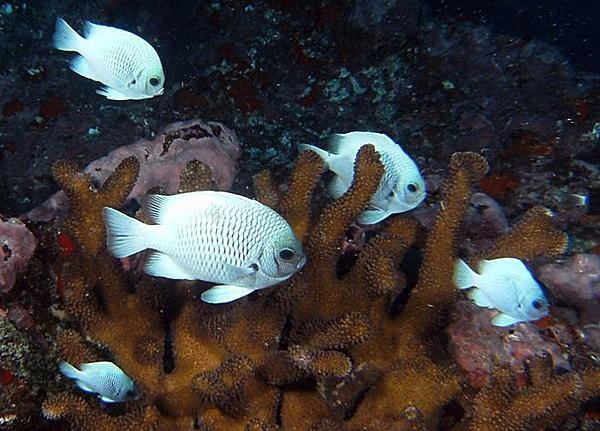 There are few reef fishes quite so maligned among aquarists as Dascyllus, the Humbug Damselfishes. Because of their argumentative nature, this ubiquitous group is rarely seen in today’s reef tanks, despite being attractively patterned and almost indesctructibly hearty. Ten species are currently recognized, with perhaps a few others yet awaiting recognition, but really only one of these has any sort of rare fish cachet—the Golden Domino Damselfish (D. auripinnis) of the Line and Phoenix Islands. Today, I’d like to sing the praises of another gorgeous member of this genus, one which few have ever heard of and fewer still have ever seen, Dascyllus strasburgi. 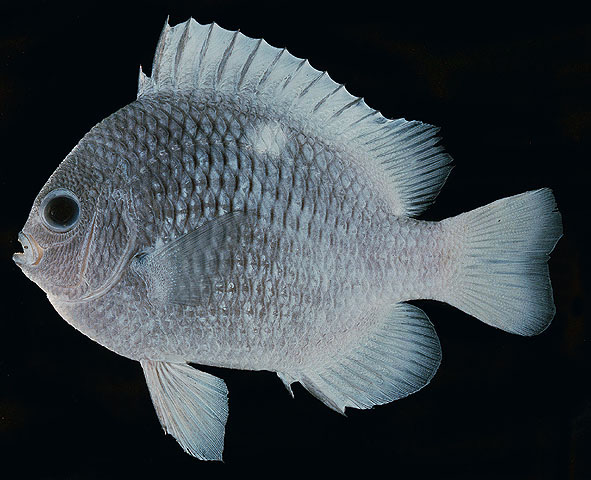 The Marquesan Domino Damselfish is perhaps the closest the family Pomacentridae has ever come to equalling the pure leucistic beauty of the Personatus Angelfish. This stunning fish, adorned throughout its body and fins with a hoary frost of white, is as rare as they come, with only a handful of images documenting its existence. But, though it may be elusive, it is actually quite common in the small sliver of the world it calls home, the Marquesas Islands of the South Pacific.

It belongs to a complex of allopatrically distributed species stretching from the Red Sea to Hawaii. The most familiar of the bunch is the Domino Damselfish, a common aquarium fish spread across the Indian and West Pacific Oceans. Juveniles are inky black, with white spots on the forehead and beneath the dorsal fin. As they mature, the spots disappear and the body tends to lighten somewhat. Breeding individuals take on a much lighter coloration, homologous to what we see in D. strasburgi, but the fins remain dark in the common Domino Damselfish. Meanwhile, in the Hawaiian Islands, the endemic D. albisella has a largely white pattern that is kept permanently when mature, but this fish also has black fins.

It’s only in the Marquesas that we find a population permanently white throughout its fins and body, though, as seen in the video above, the juveniles are essentially identical to what we find elsewhere in the Indo-Pacific. One can’t help but wonder why it is that this small region has produced such an unusual variant. It’s been noted that the waters of the Marquesas are hazier than most other reef systems, so perhaps their whiteness is a form of camouflage in these murky waters. Interestingly, the fish which it may be most closely related to is the still undescribed population found to the west in French Polynesia and the Cook Islands, which is perhaps the darkest member of the group. 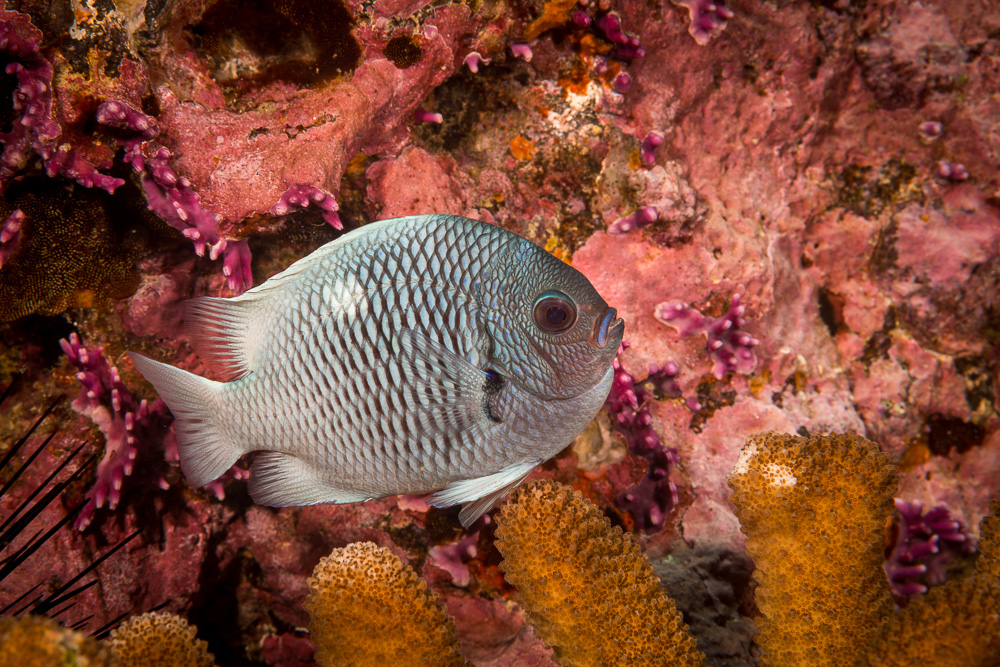 Without any aquarium collection within its range, Dascyllus strasburgi is destined to remain one of the ultimate “book fishes” among the damselfish family—the Ghost of the Marquesas, ever haunting the dreams of aquarists.