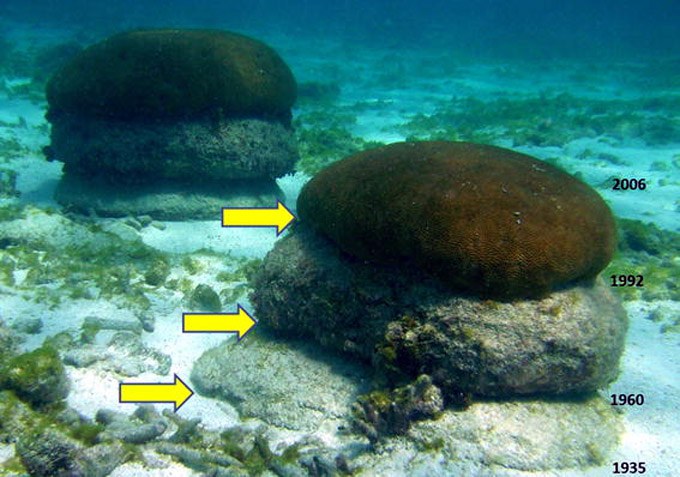 
Massive corals (corals that grow in boulder-like formation such as brain corals) can tell scientists a lot about the coral’s history as well as the history of the reef site.  Like tree rings and ice cores, researchers can take core samples of massive corals to determine their growth rates and collect data on various environmental conditions such as ocean temperature, acidity, and nutrient levels.

Then there’s formations like the photo above.  These strange-looking colonies tell us a story of strong storms.  During these storms, the exposed polyps on the sides of the colony bear the brunt of the storm and die off, leaving the top to regrow a new “head” colony.  Over time, we end up with weird, nontraditional brain coral colonies.

Likewise, dead corals left behind in mature reef aquariums can also be a reminder of our tank’s worst moments.  The timeline is condensed and the stressors are most likely anthropogenic (e.g. power failure), but the dead-corals-turned-live-rock within our tanks can tell similar tales of our mini-ecosystems’ rocky history.

Got any weird coral colonies shaped by tragedy?