Decision-making in fish with parasites are impaired 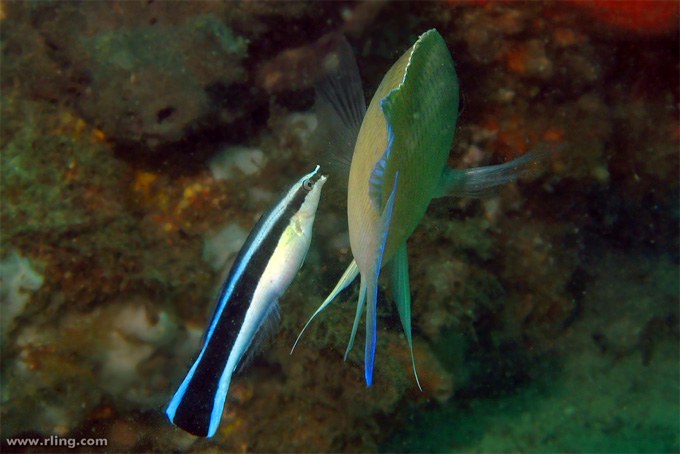 From the Université de Montréal:

A team of international researchers led by a Canadian biologist has found that infection with parasites makes it harder for seafish living in coral reefs to think.

The study, conducted at the Lizard Island Research Station in Australia and led by Assistant Professor Sandra Binning of Université de Montréal’s Department of Biological Sciences, was published today in Proceedings of the Royal Society B: Biological Sciences.

It highlights the important role of both parasites and cleaning organisms in the decision-making abilities of reef fish.

Binning and her team found that sick seafish can get well again by seeking out other animals like the blue-streaked “cleaner wrasse,” a common aquarium fish that eats harmful parasites off their “clients,” helping keep them healthy.

“We collected wild damselfish with or without access to cleaner wrasse and tested their ability to solve a feeding test in the lab.” Binning recalled. “We then compared their performance to fish that we infected with parasites experimentally.”

“We found that infection with parasites, especially in high numbers, really affects the ability of fish to learn.”

These results may not be surprising to anyone who’s been sick and tried to do activities requiring thinking and concentration. “When we’re sick, our body diverts resources away from our brain towards fighting off the infection,” Binning noted. “This makes it harder for us to think and learn.”

Humans may also benefit from staying parasite-free. “Studies have found that schoolchildren with stomach worms perform worse on standardized tests that their parasite-free peers,” said Binning. “Treating these kids with anti-parasite medication improves their performance.”

Although fish can’t take medication when they’re feeling under the weather, they can enlist the help of cleaners to help rid them of their parasites. This access to cleaning services can dramatically improve a fish’s performance in a learning test.

According to Dr. Binning, “cleaner wrasse act like the vets of the sea. Clients visit cleaners to get their parasites removed, and this helps boost their ability to think and solve the test.”

However, this vital role in maintaining healthy reef communities may be under threat: cleaner wrasse are among the top marine fishes caught for the aquarium industry, due to their colourful patterns and charismatic behaviour.

“It’s important that we understand the impacts of reduced access to cleaners on client fishes,” said Binning. “Cleaners may not be the largest or most abundant fish on the reef, but they affect the well-being of thousands of their clients. This needs to be taken into consideration when setting collection limits and managing marine parks.”