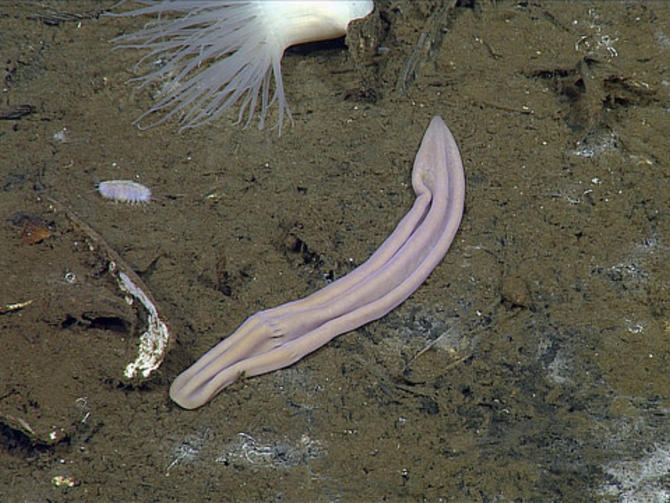 Although this might look like one, it is not an underwater purple sock, this is a photo of  Xenoturbella profunda, a species of deep sea worm which was discovered by scientists and provides links to very early life forms. Initially scientists believed that the flatworms had evolved from more complex life forms, but this recent study, published in the Journal Nature, indicates that the flatworms are one of the early forms of life. The first specimen was found in Sweden over 60 years ago, but was mistakenly linked to a mollusk using early forms of genetic testing.  “What we’ve shown is that, no, they probably always were simple,” said Nerida Wilson, a research scientist with the Western Australian Museum.
“So our little guys are simple because they are one of the early branches of the tree of life.” The flatworm was baffling to scientists since it only has one opening for which food and waste goes in and comes in, and is completely devoid of a brain, gills, eyes, or reproductive organs. Based its on its unusual shape and lack of descriptive factors, it was nicknamed the ‘purple sock‘. “That’s kind of what they remind us of, they just look like when you throw your sock at the end of the day, next to the dirty clothes bin, kind of rumpled and flattened and not very special,” Wilson said. MORE