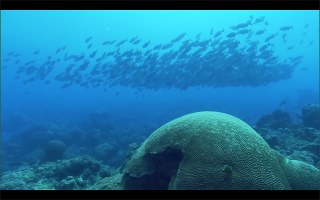 Seascape from the Flower Garden Banks


The first half of NOAA’s video showcases the Flower Garden Banks, a U.S. National Marine Sanctuary in the northwestern Gulf of Mexico south of Sabine Pass, Texas.  These protected waters harbor many species of reef fish, stoney corals, and gorgonians and sea whips.  The video includes nighttime footage of closed brain coral spawning (2:30).

The second half of the video (6:00) takes us to Hawaii.  The Papahanaumokuakea Marine National Monument (try saying that 3 times) is a remote World Heritage region in Northwest Hawaii to Midway Atoll.  It is the largest marine reserve in the United States encompassing 140,000 square miles (360,000 km2) and home to over 7,000 species, over 1,700 of which are endemic only to these waters.  Some of the rarest and most expensive marine angelfish are found here: Masked Angelfish (Genicanthus personatus), Japanese Pygmy Angelfish (Centropyge interruptus), and Bandit Angelfish (Apolemichthys arcuatus).  In fact, a beautiful and inquisitive male Masked Angelfish makes a cameo at 6:58.