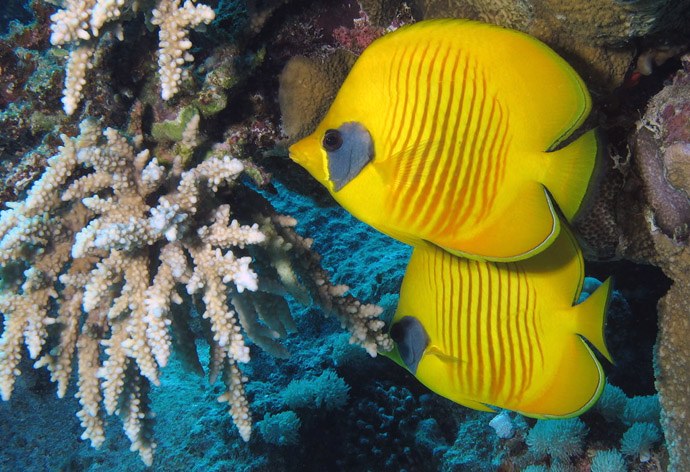 A pair of Red Sea Chaetodon semilarvatus: a beautiful but very risky fish for reef aquariums. Photo by Derek Keats.


The abstract of the open access scientific paper published in Nature reads:

Seaweed-dominated coral reefs are becoming increasingly common as environmental conditions shift away from those required by corals and toward those ideal for rampant seaweed growth. How coral-associated organisms respond to seaweed will not only impact their fate following environmental change but potentially also the trajectories of the coral communities on which they rely. However, behavioral responses by coral-associated organisms to seaweeds are poorly understood. This study examined interactions between a guild of obligate and opportunistic coral-feeding butterflyfishes (Chaetodontidae) and scleractinian corals to determine whether fishes continue to interact with corals in contact with seaweed or if they are avoided. Under natural conditions, all species interacted almost exclusively with seaweed-free corals. In a controlled patch reef experiment, fishes avoided corals in physical contact with seaweed, irrespective of dietary preferences. When visual seaweed cues were removed, butterflyfish continued to avoid corals that had been in contact with the allelopathic Galaxaura filamentosa, suggesting that chemical cues produced by coral-seaweed interactions are repellent. These findings suggest that, due to deleterious visual and chemical cues produced by coral-seaweed interactions, coral-associated organisms may struggle to locate resources as seaweed-free corals decline in abundance.

While the finding is predominantly concerned with how algae encroachment affects wild coral reefs by driving away certain fish like Chaetodontids, allow us to inject a (selfish) reefkeeping spin: Might this finding also provide a possible method for aquarists to keep facultative corallivores (organisms they can eat corals but whose diet doesn’t exclusively depend on corals) in coral-filled aquariums without fear of them tearing apart SPS and LPS colonies?